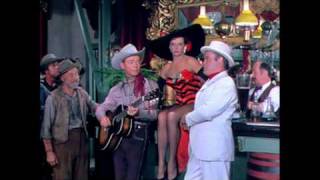 Sequel to Hope's comedic masterpiece "The Paleface" in which he teams up with Roy Rogers to recover his inheritance of gold, stolen by Junior, the neighborhood bandit. Songs included are "Am I In Love" and "Buttons and Bows." Academy Award Nominations: Best Song ("Am I in Love").

This is the classic romance between a woman, a man and the horse he loves. When a wild bunch of robbers start terrorizing the wagon trail in the untamed west, two lawmen come riding (undercover) into a one-horse town to capture the gold marauders. And the moment beauteous local saloon mistress Mike spots righteous cowboy Roy, she falls right in love with him. Only problem: he prefers his horse to girls.
Into the midst of this lunacy -- and making matters worse -- steps Ivy League-educated tenderfoot Paleface Potter Jr, who's only concerned with getting his inheritance. But when he takes a shine to Mike, the lawmen hope Paleface will expose her as the criminal ringleader... while she just hopes he'll go away!

22%off
Adventures of Bullwhip Griffin
$11.70 Super Savings
Add to Cart