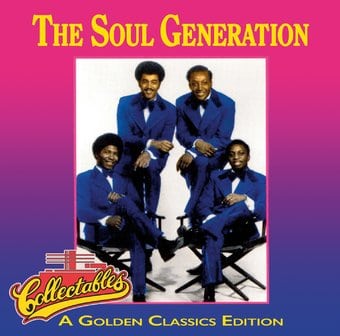 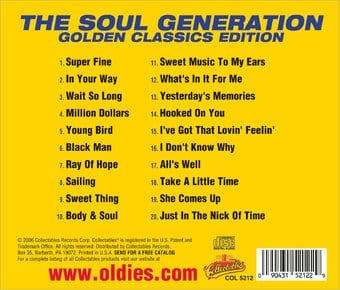 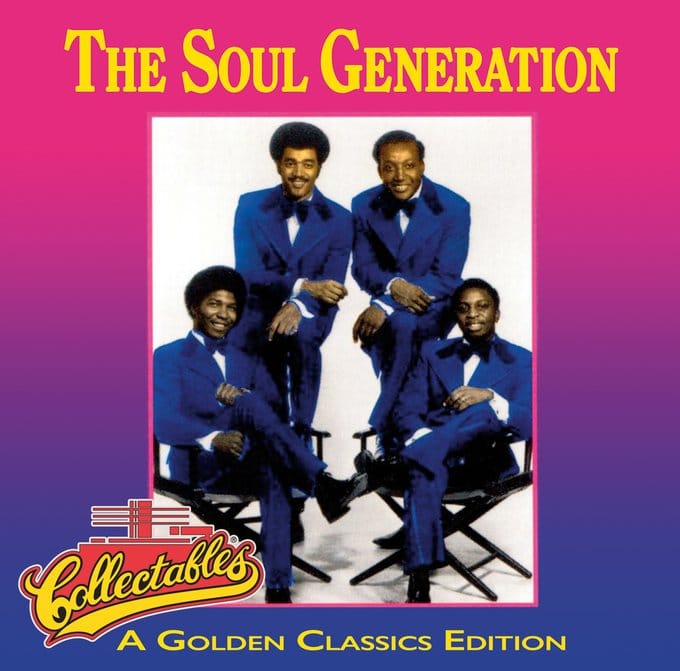 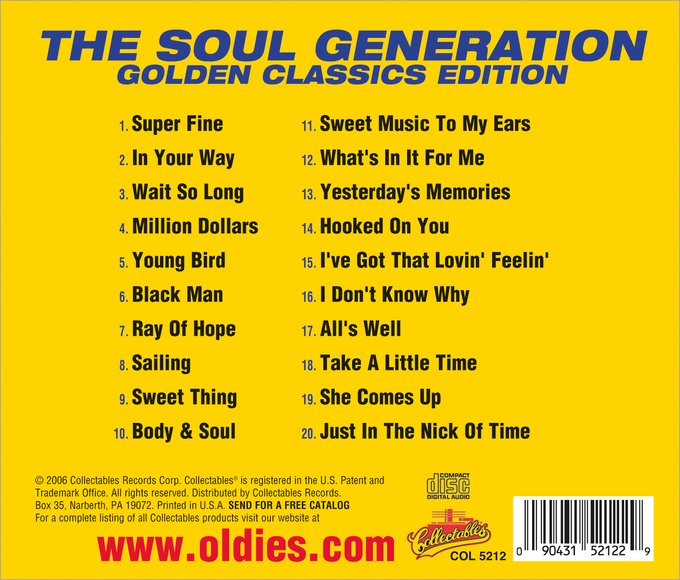 Get email alerts for Soul Generation
15 ratings
Available: Usually ships in 1-3 business days
Add to Cart
Add to Wishlist
Format:  CD-R
item number:  COL 5212
Related products:
The Stylistics: The Very Best of the Stylistics for $11.20
The Five Stairsteps: The First Family of Soul: The Best of the Five Stairsteps for $6.10
Black Ivory / The Escorts: Black Ivory Meet The Escorts for $5.98
Linda Jones: Hits Anthology for $14.50
The Softones: The Best of the Softones for $16.30
91% recommend us!

A whole generation grew up on the Soul Generation. This sweet sounding vocal quartet was formed when its members were still in high school in Jersey City, NJ. Their break-out hit was "Body and Soul", which was released independently, and later led to a record deal on their own. With harmonies that could make them sound like the Chi-Lites, the group was just as comfortable with up tempo numbers as they were with ballads, as this collection of their best proves.

Includes liner notes By Paul Kyser.
Liner Note Author: Paul L. Kyser.
Twenty tracks, ballads and shufflers, with a feeble attempt at social commentary, "Black Man." A sweet falsetto similar to the Younghearts' Ronnie Preyer leads more than half the songs; a David Ruffin-ish tenor cranks out the rest and serves as a balance to the syrup. Some digression occurs on "What's in It for Me," which is loaded with studio tricks; "Wait So Long" mimics a Thom Bell production; and "I've Got That Lovin' Feelin'" reverses the theme of the Righteous Brothers' "You've Lost That Lovin' Feelin'." "Super Fine," "I Don't Know Why," and "Ray of Hope" are stellar representations. A fine singing group, but nobody, including producer Paul Kyser, had the Midas Touch and the Soul Generation never enjoyed a national R&B hit. ~ Andrew Hamilton


This group not as well known as the Moments, Delfonics, Chi-Lites and some of the other groups but sounds just as good! If you like those groups, you will love The Soul Generation!

74%off
Freda Payne
Come See About Me
$4.19 Super Savings
Add to Cart