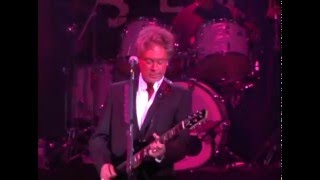 Raspberries - I Wanna Be With You (Live!) (Music Video)

Paste (magazine) - "POP ART proves the Raspberries to be a tremendously capable group, musically. Bryson delivers fluid, squealing solos, while Smalley anchors the group through a surprising number of rhythmic twists and turns."

Personnel: Eric Carmen (vocals, guitar, piano); Wally Bryson (vocals, guitar); David Smalley (vocals, bass guitar); Billy Sullivan (guitar, harmonica, background vocals); Paul Sidoti (guitar, keyboards, background vocals); Jennifer Lee (keyboards, background vocals); Jim Bonfanti (drums, percussion); Derek Braunschweiger (percussion).
Audio Mixer: Tommy Allen .
Liner Note Authors: Bernie Hogya; James Rosen; Ken Sharp ; Cameron Crowe.
Recording information: House Of Blues, Cleveland, OH (11/26/2004).
Photographer: Gene Taylor .
The Raspberries may not have been the best American power pop band of the '70s -- that honor would go to Big Star -- but they were likely the most influential, by virtue of the fact they had actual hit singles. "Go All the Way," "I Wanna Be with You," "Tonight," and "Let's Pretend" were brilliant ear candy in a time when crunchy guitars, close harmonies, and British Invasion-style pop hooks were in short supply on the charts, and their body of work has held up remarkably well since they broke up in 1975. While plenty of bands with lesser credentials have made a career out of playing the sheds and fairs each summer, the Raspberries have opted not to cash in on their past glories, thanks in part to Eric Carmen's solo career. But in 2004, the original Raspberries lineup -- Carmen on vocals, guitar, and piano, Wally Bryson on guitar and vocals, David Smalley on bass and vocals, and Jim Bonfanti on drums and vocals -- reunited for a short string of dates, including a sold-out show in their hometown of Cleveland. Pop Art Live documents that Cleveland show, and anyone who figured these guys might be phoning it in after close to 30 years gets shut down right out of the gate. Here, the Raspberries merge the superb craftsmanship of their classic recordings with the sweat and muscle of a crack band having a great time. While a few ringers were on-stage to help re-create some of the studio arrangements, the core of the band still sounds vital and eager to rock the house, and they fill the set list with classic hits, deep album cuts, and relevant covers, even throwing in a couple of tunes by Bryson, Smalley, and Bonfanti's early band the Choir. On Pop Art Live, the Raspberries manage to sound enough like their old records to satisfy casual fans as they add enough energy and grit to set this apart for the truly obsessed, and the recording and mix capture it all beautifully. This won't (and shouldn't) replace the Raspberries' classic albums in your collection, but if you want to know how this great band sounded in front of an audience, this is just what you've been waiting for. ~ Mark Deming

The Raspberries
Greatest
$13.60
Add to Cart

The Choir
Artifact: The Unreleased Album
$16.30
Add to Cart

25%off
Electric Light Orchestra
From Out of Nowhere
$10.49 on Sale
Add to Cart

Hudson Brothers
Totally Out of Control
$26.60
Add to Cart