Earthmen on a fabulous, peril-journey into outer space! 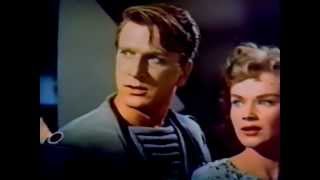 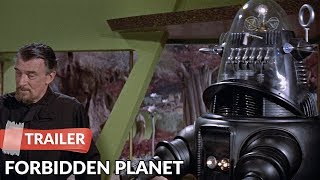 A dutiful robot named Robby speaks 188 languages. An underground lair offers evidence of an advanced civilization. But among Altair-4's many wonders, none is greater or more deadly than the human mind.

Forbidden Planet is the granddaddy of tomorrow, a pioneering work whose ideas and style would be reverse-engineered into many cinematic space voyages to come. Leslie Nielsen plays the commander who brings his spacecruiser crew to the green-skied world that's home to Dr. Morbius (Walter Pidgeon), his daughter (Anne Francis)...and to a mysterious terror. Featuring sets of extraordinary scale and the first all-electronic musical soundscape in film history, Forbidden Planet is in a movie orbit all its own.

Shakespeare's THE TEMPEST is transformed in this landmark science-fiction film. Spacemen travel to a planet ruled by Dr. Edward Morbius (Walter Pidgeon), who has built a kingdom with his daughter and obedient robot Robby. The good doctor is plagued by his mad quest for knowledge through his "brain booster" machine, and by Freudian "monsters from the id" as his daughter discovers other men and learns to kiss.

Customer Rating:
Based on 64924 ratings.


Forbidden Planet-after this movie every little boy wanted a Robbie the Robot and every teen-aged boy wanted an Anne Francis-both for obvious reasons.
Commander Adams (Leslie Nielson) and his crew arrive at an earth colony established years earlier only to find the only survivors are Dr. Morbius (Walter Pidgeon) and his daughter Altairia (Anne Francis). They are doing well with the help of Robbie the Robot, a machine built by Morbius despite his lack of education in robotics. The rest of the party were killed by some evil force years earlier. We also discover the planet was home to the Krell, an advanced race that disappeared suddenly 200,000 years earlier.
The mystery gradually unravels in this classic psychological sic-fi
classic.


This movie is a Great movie.My husband saw this movie for the first time a long time back and told me about it.Then we rented it many times and it became a family favorite.
We now own it,and we watch it with our grandchildren!It's truly a classic film for all.