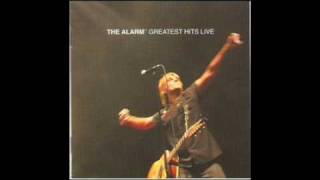 The Alarm: Mike Peters (vocals, acoustic guitar, harmonica); James Stevenson (acoustic & electric guitars); Richard Llewellyn (bass, background vocals); Steve Grantley (drums).
Principally recorded live at the Shepherds Bush Empire, London, England on December 15, 2000.
Personnel: Mike Peters (vocals, acoustic guitar, harmonica); James Stevenson (acoustic guitar, electric guitar); Steve Grantley (drums, cymbals).
Audio Mixers: Martin Wilding; Mike Jones .
Recording information: Shepherds Bush Empire, London, England (12/15/2000); The Gathering (12/15/2000).
Taken from a few December reunion shows in 2000, the Alarm's Greatest Hits Live is a document of their eventual comeback after almost ten years of being apart. The U2 comparisons that have dogged them through their entire career have been thrown aside now that Bono has traded in the self-important rock-savior image. What that means is that the Alarm may be one of the few bands really making this sort of music anymore, and although these are all songs from the past, they seem that much more important because of it. Mike Peters and the gang play every song as if it's their last encore; they put a lot of passion and power into their performances and it shows on the album. The only shame of the entire project is the lack of variety in the track listing. Every song has that same sweeping, epic sound that the one before it did. During "Marching On," the first real song of the album, the music is at its most effective point because of the power and emotion put behind it. But by the middle of the album, it starts getting a little redundant. These are all excellent performances, but they just suffer from a general sameness that keeps it from being truly great. Probably the nicest part of the whole thing is that the band still sounds good, even vital at times, which is something that few bands from that era can still give to their material. The time off might have helped, but the Alarm still has some fuel in the tank yet. Fans of the band will probably want to give this a listen, but for casual listeners it might be better to start at Best of the Alarm & Mike Peters and move on to their other material from there. ~ Bradley Torreano