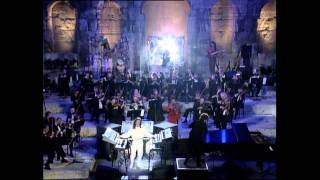 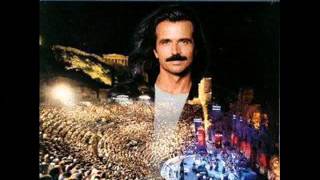 The Best of Yanni (Music Video)

LIVE AT THE ACROPOLIS is available in CD and DVD versions in the boxed set YANNI: THE PRIVATE YEARS, which also includes the CDs IN MY TIME, REFLECTIONS OF PASSION, IN CELEBRATION OF LIFE and DARE TO DREAM.
Personnel includes: Yanni (piano, keyboards); Shardad Rohani (conductor, violin); Karen Briggs (violin); Julie Homi, Bradley Joseph (keyboards); Ric Fierabracci (bass); Charlie Adams (drums); Michael "Kalani" Bruno (percussion).
Recorded live at the Herod Atticus Theatre, Athens, Greece on September 25, 1993.
Personnel includes: Yanni, Royal Philharmonic Orchestra.
Recorded live at the Acropolis in Athens, Greece on September 24th, 1993.
Includes backstage footage and interviews with Yanni.
Yanni has enjoyed sensational success over the past several years with his lush, densely layered, new age orchestrations. But the Greek keyboardist/composer's overtly romantic musings achieve a bold new dimension when augmented by a full symphony orchestra, and some of the more rhythmic elements in his music, previously masked under a wall of synthesizers, come to the fore--and the resulting music is much closer to progressive rock (and his own native roots) than new age.
Thus we have distinctly Greek rhythmic cycles (in seven) keying the variations on the opening "Santorini" and "Keys To The Imagination," richly colored by percussion fanfares and instrumental breaks--demonstrating that the breadth of Yanni's music and his interest in popular forms is greater than many of his diehard fans have grown to expect. And on an arrangement like "The Rain Must Fall," Yanni frames his boleroesque piano shadings against a mysterious backbeat and fretless bass, which soon develops into--of all things--an R&B-styled slap bass groove.
But those fans drawn to the purely lyric side of Yanni's art won't be disappointed by the composer's programming on YANNI LIVE AT THE ACROPOLIS. Such keyboard-inflected fantasias as "Reflections Of Passion," "One Man's Dream" and "Until The Last Moment" illustrate Yanni's sentimental yearnings, while the Oriental flourishes of "Swept Away" demonstrate why he's achieved such an immense following among adult contemporary listeners.

Yanni
Devotion: The Best of Yanni
$8.20
Add to Cart

Yanni
The Dream Concert: Live from the Great Pyramids of Egypt...
$19
Add to Cart

Yanni
The Dream Concert: Live from the Great Pyramids of Egypt...
$16.30
Add to Cart