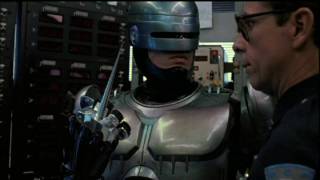 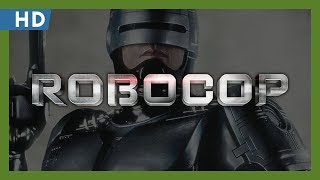 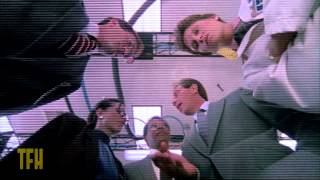 "I'd buy that for a dollar!"
- Phrase from a popular future gameshow
"Dead or alive, you're coming with me."
- RoboCop (Peter Weller) to a thug
"It's just a glitch."
- OCP executive Dick Jones (Ronny Cox) to his superior (Dan O'Herlihy) after Jones's ED-209 robotic crimefighter prototype blows away a young employee during a botched product demonstration

Peter Weller stars in this urban sci-fi Western as Murphy, a good cop who literally gets shot to pieces while on duty and winds up reborn as a crime-fighting machine. An ambitious executive (Miguel Ferrer) at OCP, the corporation running the futuristic city of Detroit, fuses Murphy's torso with bulletproof steel limbs and rewires his brain with computer chips so he will have no will of his own. Murphy's former partner (Nancy Allen) tries to help RoboCop remember his human past, but his circuitry blocks whatever dim memories remain. Luckily, a chance encounter with one of his killers wakes up the human essence in RoboCop, causing him to rebel against his programming and commence on a one-cyborg mission of vengeance that leads all the way to the top of OCP. This second English-language film by Dutch director Paul Verhoeven is unremittingly brutal, darkly comic, and filled with bits of clever satire and pathos. A special highlight is the hilariously incompetent ED-209, RoboCop's main rival in the department of automated law enforcement. Considered by many critics to be one of the best films of its genre, ROBOCOP was followed by several sequels and a 1994 TV series.

Paul Verhoeven's ROBOCOP is an ultraviolent but extremely clever sci-fi action film set in a burnt-out, crime-infested Detroit of the future. When a cop is almost killed in the line of duty, the corrupt corporation that runs the police department decides to use his near-dead body as the basis for a specially constructed cyborg--the first in what they intend to be a line of highly efficient, crime-fighting machines. But the corporate execs didn't take into account the vestiges of human nature still lurking beneath all that state-of-the-art hardware. It turns out RoboCop has a mind of his own and sets out to take bloody revenge on the vicious gang members who tried to kill him.