The motion picture the world has been waiting for! 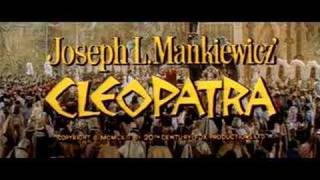 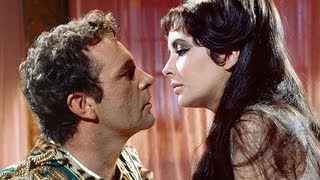 "Your Roman generals become divine so quickly!"
- Cleopatra (Elizabeth Taylor) to Julius Caesar (Rex Harrison)
"Without you this isn't a world I want to live in--much less conquer."
- Cleopatra to Marc Antony (Richard Burton)
"You have a way of mixing politics and passion."
- Julius Caesar to Cleopatra

This epic, spectacular love story of Egyptian queen Cleopatra and the Roman leaders Julius Caesar and Marc Antony has dazzled audiences with its elaborate sets, daring costumes, and thrilling sea battle since its release, but these can't compare with Elizabeth Taylor as the mesmerizing Cleopatra, struggling to save her Egyptian empire. When this film was released, it was known as much for its opulent filmmaking as it was for its huge budget overruns--it took two years to film because of Taylor's various ailments and a major script rewrite by Joseph L. Mankiewicz, moving the shooting studio from England to Italy, and replacing the original director and the actors to play the Roman leaders--as well as the very public and tempestuous offscreen affair between costars Taylor and Richard Burton, who duplicated their romance on the silver screen as the doomed Cleopatra and her true love, Marc Antony. Despite all the hubbub surrounding the film, audiences realized that its spectacular story could not be denied, and it has remained a classic ever since. The triple-star power of Taylor, Burton, and Rex Harrison (playing Julius Caesar) radiates throughout this lengthy production, and Mankiewicz, a consummate magician at depicting the shadings of human emotion, directed this threesome in one of the most famous and gloriously powerful love triangles ever to be captured on film.

CLEOPATRA is a lengthy, sprawling, spectacular love story, helmed by Joseph L. Mankiewicz, depicting Cleopatra's manipulation of Julius Caesar and Marc Antony in her ill-fated attempt to save the Egyptian empire. The lavish, stunning production stars Elizabeth Taylor and Richard Burton in legendary on- (as well as off-) screen performances.