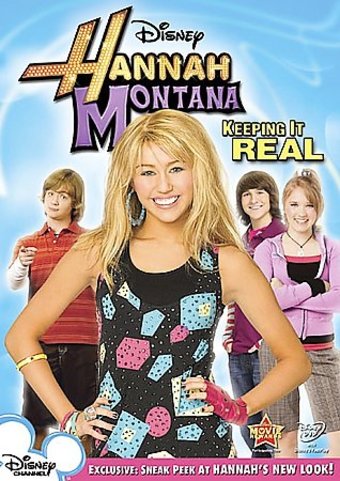 Scores of Disney Channel fans already know Miley Stewart's (Miley Cyrus) fabulous secret: by day, she's just the girl next door, but after dark, she's Hannah Montana, the famous pop star. This collection includes five full episodes from the wildly popular series, as well as a bonus, behind-the-scenes featurette, "Miley's Makeover: Hannah Gets a New Look." KEEPING IT REAL follows Miley as she tries to balance her budding Hollywood career with the stuff of daily life, such as getting her driver's license and wooing Johnny Collins (Corbin Bleu, HIGH SCHOOL MUSICAL).

Get ready to rock! five episodes from the smash-hit Disney Channel Original Series are on DVD for the first time ever, including the bonus episode "Ready, Set, Don't Drive." HANNAH MONTANA: KEEPING IT REAL features awesome guest stars Corbin Bleu and Dwayne Johnson! Plus, an exclusive bonus feature takes you behind the scenes for "Miley's Makover: Hannah Gets A New Look." Country gal Miley Stewart tries to keep it real while the "other side" of her -- everyone's favorite pop sensation, Hannah Montana -- leads a totally glamourous life with stylin' clothes, famous pals and awesome celebrity perks. While she's thinking about using her secret Hannah identity to build her Hollywood career, get her driver's license and win the hearts of the cutest boys like hottie Johnny Collins (Corbin Bleu), Miley manages to land herself in the spotlight and in hilarious situations again and again! But through it all, she learns that what's most important is to be yourself -- whoever you are!