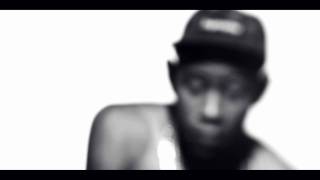 Rolling Stone - p.77
3.5 stars out of 5 -- "The leader of hype-slathered L.A. collective Odd Future is a paradoxical double threat, mixing Eminem shock-and-awe with R&B-tinged elegance."
Entertainment Weekly - p.70
"Not since early Eminem has a rapper delivered lyrics so vicious..." -- Grade: A-

Released by the XL label in a one-album deal, Goblin is the first widely accessible release from the Odd Future crew, an outlandish alternative hip-hop consortium that was the epitome of underground hip in 2011. With social networking, video sharing, and mixtapes as their tools, Odd Future's wild mix of skateboarding culture and scatological rhymes struck a chord with the right-click-and-save crowd, who will be relieved to know that the crew's leader delivered his aboveground debut without any sign of outside influence. Parents and defenders of good taste should be just as horrified because "God damn I love bitches/Especially when they just suck dick and do dishes" ("Transylvania") is the way Tyler, the Creator rolls, coming incorrectly in a ski mask, irresponsibly rapping about rape, and with suicidal tendencies: the mindset, not the band. It's just as ugly as it sounds, and when Tyler tells listeners "this ain't horrorcore," it's followed by an even more ridiculous claim that you can "dig deeper" for proof, but then comes a brilliant line like "She's the one I'm thinking of when I am beating Richard up" ("Her"), or an incredibly infectious zombie anthem ("Sandwitches"), and suddenly, this Grand Guignol called Goblin lives up to the hype. Just like on his debut mixtape, Bastard, the rapper's fictional therapist helps tie the tracks together for a decent overall flow, and Tyler's production is as attractive as ever, contrasting his disgusting rhymes and gruff voice with subdued, sometimes serene beats that echo and creep. While the album is a revolutionary object in that such fantastic filth was born and flourished outside the corporate -- and even indie -- music industry, production is about the only thing to be objective about, as everything else is polarizing and preaching to the converted. Odd Future? Odd Freakshow is more like it, but if you've ever wondered what an inspired mash of Three 6 Mafia, Pharell Williams, and Kool Keith would sound like if they absolutely hated you, then Goblin is the sweet pain you crave. ~ David Jeffries