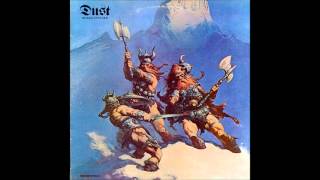 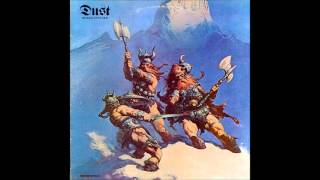 Liner Note Authors: Kenny Aaronson; Kenny Kerner; Marky Ramone; Richie Wise.
Photographers: Ed Clarke; Alan Weinstock.
Dust were almost an ideal cult band: a group that were of their time but never belonged to it, yet its members became better-known later, with drummer Marc Bell becoming Marky Ramone and bassist Kenny Aaronson joining the Stories, a band the singer/guitarist produced along with Dust producer Kenny Kerner. Of course, neither 1971's Dust or its 1972 sequel Hard Attack -- both combined on this Legacy two-fer from 2013 -- sound anything like the breakneck punk of the Ramones or the Baroque pop of the Stories, nor is it quite the proto-metal of its lore. Instead, the two albums find a power trio adrift in the mythic murk of the early '70s, sometimes recalling a bit of the towering cinematic crunch of Mountain, sometimes the folk-art-blues of Jethro Tull, occasionally dipping into a bit of blooze boogie but not as often as they dabble in some of the majestic art rock muddle of early Deep Purple. They can be heavy, they can be loud, but there's too much color and too many acoustic guitars for this to be easily be pegged as metallic. Instead, it's where acid rock begins to unravel, hitting very hard before receding into faux hippieland, peppered with pseudo-profound tales, but it's always clear that Dust would rather be "Chasin' Ladies." All this makes Dust read a lot more interesting than they sound: they have these unformed ideas, unwitting allusions, and gangly gallop that are kind of intriguing on their own terms but never quite add up to more of the sum of their parts. A great cult item, in other words: listening to it, you can hear why people love it, even if when you can't fall for its charms yourself. ~ Stephen Thomas Erlewine