The Game Wants to Play With You. 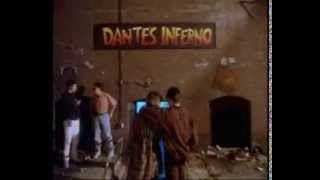 Re-released for the first time as a single DVD with gorgeous updated cover art! All the kids in town are dying to play the hot new video game ARCADE. Trouble is once you play the game you can kiss reality good-bye. Arcade has seven levels of excitement, adventure, and terror for its players. The game transports you to another world with its stunning graphics, thrilling sound effects, and virtual reality simulation. It is the ultimate experience in a video game. But excitement like this doesn't come cheaply - when you battle with ARCADE you're putting your life on the line. The kids have accepted the challenge and are absorbed into the game. Only Alex (Megan Ward) realizes that their mysterious disappearances are linked to ARCADE. She must battle the game, alone. Too bad she's never been very good at games...

Alex Manning and her friends decide to visit the local video arcade known as "Dante's Inferno" where a new virtual reality arcade game called "Arcade" is being test marketed by a computer company CEO. However, it soon becomes clear that the teenagers who lose are being imprisoned inside the virtual reality world by the central villain "Arcade" and takes over their minds. -- Description provided by TMDb

60%off
Invisible: The Chronicles of Benjamin Knight (DVD)
$3.98 ENDS TONIGHT
Add to Cart