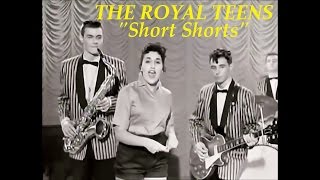 Best known for their Top 10 1958 hit "Short Shorts", The Royal Teens were originally known as The Royal Tones when they got their start in New Jersey. Bob Gaudio, key member of The Royal Teens, later went on to international success as a member and chief hit-writer of The Four Seasons.

Includes liner notes by Mark Marymont.
Liner Note Author: Mark Marymont.
Unknown Contributor Roles: Larry Qualiano; Joe Villa; Al Kooper; Tom Austin; Bob Gaudio.
A hot 12-song collection with good sound and a first-rate cross-section of the Royal Teens' stuff, mostly for smaller labels, apart from the title track and the Capitol tunes. Those are worth the price by themselves, but there's not a bad, or even a second-rate song here (except maybe the closing number, "Open the Door"), even formula rockers like "Dottie Ann" played and sung with the kind of wild spirit and reckless abandon (and even some libidinous energy) that you hoped for every time you turned on the radio, if you were into rock & roll. Alternating with pretty doo wop style ballads like "Believe Me" and "My Kind of Dream," they make this disc a winner from beginning to end, and worth owning even if you've already got the title track on a compilation. ~ Bruce Eder