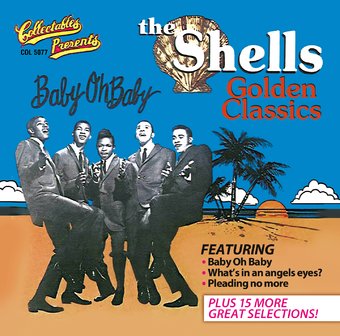 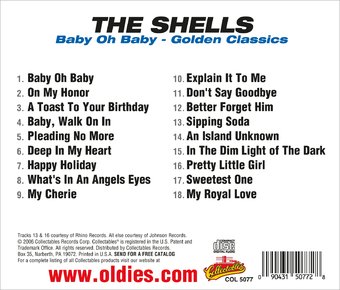 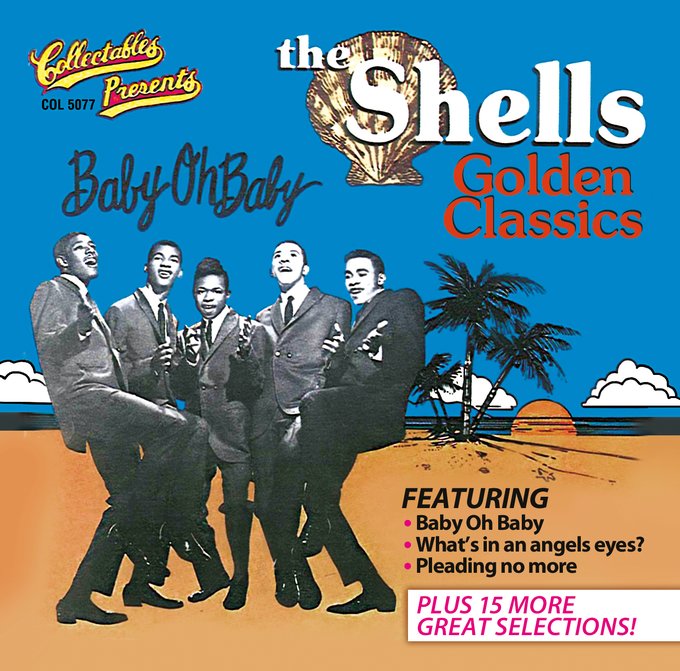 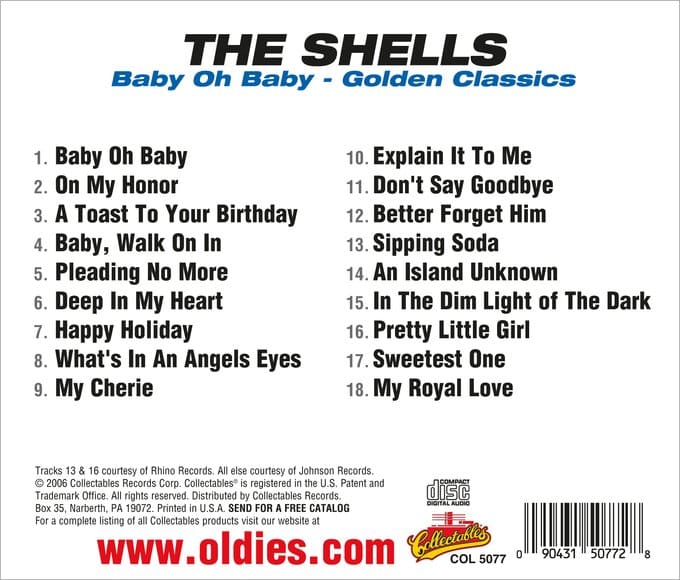 Get email alerts for The Shells
22 ratings
Available: Usually ships in 1-3 business days
Add to Cart
Add to Wishlist
Format:  CD-R
item number:  COL 5077
Related products:
The Passions: Just to Be with You / Best of for $18.60
The Paragons / The Jesters: The Paragons Meet The Jesters for $5.98
91% recommend us!

The Shells were one of the finest Doo Wop groups in the late '50s. This quintet recorded "Baby Oh Baby" in 1957, but it took three years for the record to crack the Top 40. The group continued recording into the '60s - with their best work collected here.

Includes liner notes by Mark Marymont.
Personnel: Nate Bouknight (vocals); Randy Alston, Bobby Nurse (tenor); Gus Geter (baritone); Danny Small (bass voice).
The year 1957 strangely reasserted itself on the charts in the early '60s, when several reissues of 1957 recordings became hits: Ned Miller's "From a Jack to a King," the Mello-Kings' "Tonight, Tonight," and the Shells' "Baby Oh Baby." Johnson Records re-released "Baby Oh Baby" in 1960 at the urging of a record store employee and very nearly put the group in the pop Top 20. It was the group's only hit, and one that ironically failed to make the R&B charts. The Shells had broken up by the time "Baby Oh Baby" finally reached the hit parade, but they re-formed and made a few more recordings, none of which was successful. Golden Classics collects most of the group's Johnson sides from 1957-1963, beginning with their one hit before navigating the pleading doo wop ballads and celebratory finger-snappers ("Pleading No More," "Happy Holiday") that constitute their recording legacy. There is an appealingly earnest quality to the Shells' sound, accentuated by the slightly husky and not at all flashy lead vocals of Nate Bouknight. There are lengthier Shells anthologies on the market, most notably Juke Box Treasures' 34-track Golden Hits, but one thing that sets Golden Classics apart is its inclusion of both sides of a rare End label single from 1958. ~ Greg Adams

54%off
The Rivieras
Moonlight Cocktails - Golden Classics (CD-R)
$5.98 on Sale
Add to Cart