A story of sex, thugs and rock 'n roll. 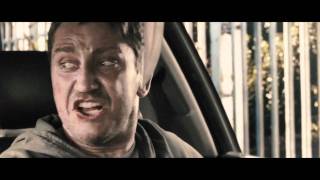 Guy Ritchie returns to form with this cockney crime caper starring Gerard Butler and Tom Wilkinson. Lenny Cole (Wilkinson) is a bungling London crime boss who calls the shots in London's underworld. We learn all about Lenny from Archie (Mark Strong)--his second in command--who serves as the film's sly narrator. When a wealthy Russian property dealer by the name of Uri (Karel Roden) looks to Lenny for help on a major new deal, Lenny is eager to assist (for a very large fee, of course). Uri agrees to pay, and as a show of faith, he insists that Lenny borrow his "lucky painting." Uri then asks his accountant, Stella (Thandie Newton), to transfer the money to Lenny, but things quickly go awry when two crooks known as Mumbles (Idris Elba) and One Two (Butler) intercept the money before it reaches him. To make matters worse, the lucky painting has mysteriously been stolen, and the number one suspect is a crack-addicted pop star, Johnny Quid, who is presumed dead. Violent hijinks ensue as Lenny desperately tries to locate the painting, Uri calls in some sadistic thugs to recover his money, and Johnny Quid suddenly resurfaces. Men are battered with golf clubs, fed to crawfish, and attacked with machetes, and a surprise twist ending neatly ties up the whole bloody mess.

Fans of Ritchie will likely be very pleased to see him return to his SNATCH-style of filmmaking. ROCKNROLLA has the same frenetic, humorous edge as the film that made him famous, though critics might complain that this particular style is starting to look a little dusty. Regardless, ROCKNROLLA features many fine performances, and once you get past the rather slow beginning, it kicks off into an entertaining and amusing romp.