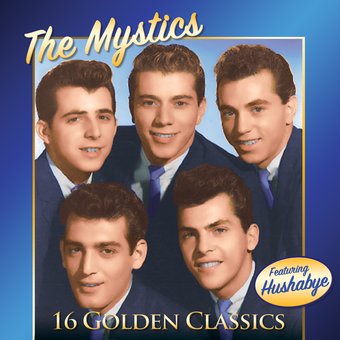 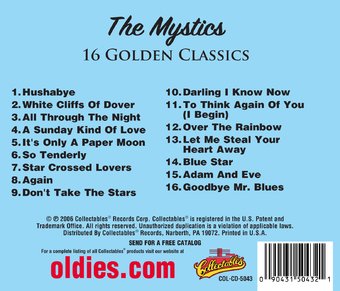 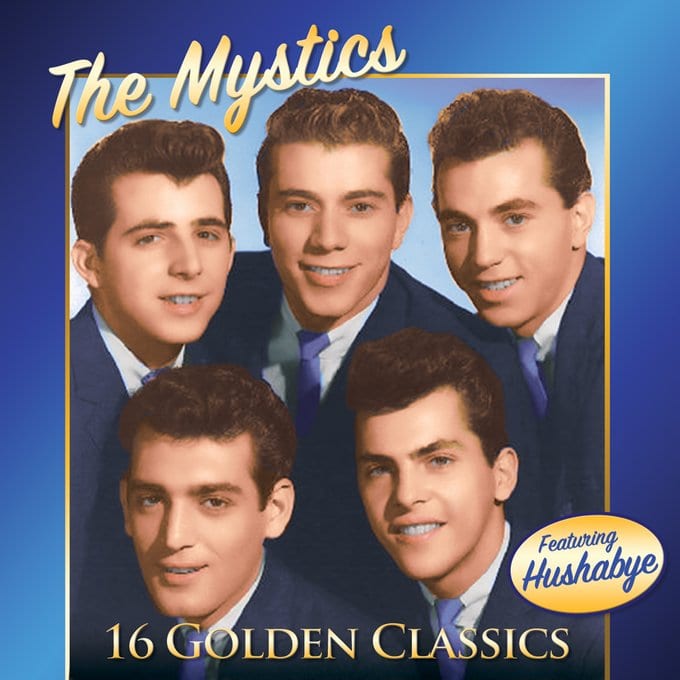 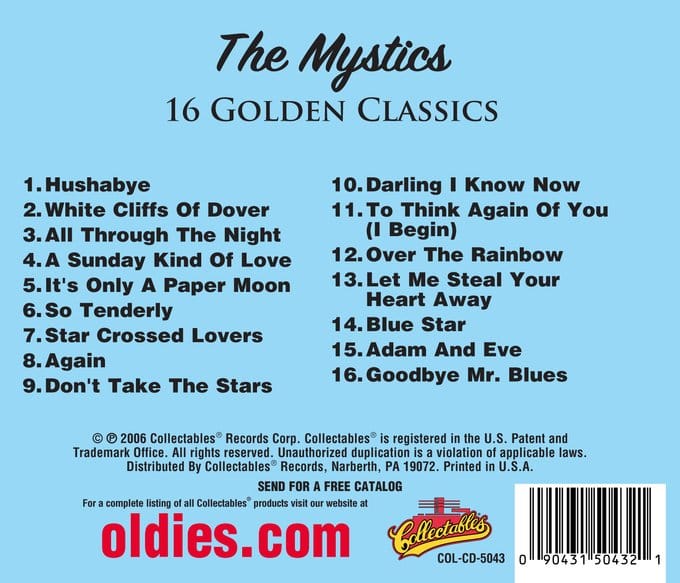 The members of this vocal quintet from Brooklyn were childhood pals who rose to fame in the late '50s. The group specialized in quietly, relaxed harmonies which were well-suited for their chart toppers such as "Hushabye" and "Don't Take the Stars". This set brings together the best of their work, originally recorded for Laurie Records

The Mystics: Phil Cracolici, Al Contrea, Albee Cracolici, Bob Ferrante, George Galfo (vocals).
Unknown Contributor Role: The Mystics.
16 Golden Classics is interesting enough for the excellent Top 20 hit "Hushabye" and early guest appearances by Paul Simon and Jay Traynor of Jay & the Americans, but this undeservedly obscure vocal quintet had a consistently enchanting sound and several very good songs. The tinkling xylophone and soft harmonies make the Mystics a real find, and the group's ability to put their stamp on well-worn material redeems even the most obvious covers ("A Sunday Kind of Love," "White Cliffs of Dover"). The Mystics' rockers aren't as strong, but they are few in number, and bonus points are awarded for "Star Crossed Lovers," the group's entry into the teen tragedy sweeps. 16 Golden Classics compiles practically everything the group recorded for Laurie Records from 1959-1961 and is a rewarding anthology for serious enthusiasts of white doo wop. ~ Greg Adams

The Crystals
Da Doo Ron Ron: The Very Best of the Crystals
$8.20
Add to Cart

54%off
The Five Satins
Five Satins Sing Their Greatest Hits
$5.98
Add to Cart


I have seen the Mystics perform in person and they were great. There was a night club on route 9 in Sayervill New Jersey called the Thunderbird Lounge and I always went there to hear the Mystics.---------The Wolfman-------------