A Hilarious Look at Our Nation's Leaders 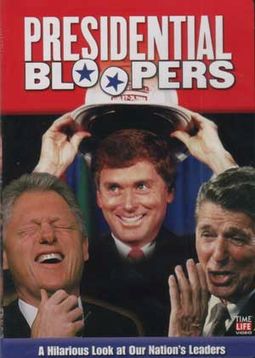 The American President. Powerful. Influential. Well-respected. And sometimes all too human! Laugh along with the presidents as they laugh at themselves in this celebration of the funniest and most down-to-earth moments in American presidency - a rare, behind-the-scenes look at some of the most outrageous White House wackiness ever captured on video.

Some of the hilarious un-presidential moments you'll witness include Gerald Ford stumbling off Air Force One, Ronald Reagan catching a few winks during a live news conference, George Bush sliding head-first down a bowling alley, Bill Clinton yukking it up with Boris Yeltsin and much more! Presidential Bloopers is an affectionate tribute to our nation's leaders as they slip, slide, misspell, misspeak, bumble and blunder their way into history. The only thing they have to fear is... flubbing in front of the camera. Own a loving and lighthearted look at the leaders of the free world - captured on one hilarious video!

Gerald Ford's bumbling has been mined for comic gold over the years, most notably by Chevy Chase. However, other Presidents' pratfalls haven't garnered nearly as much attention (excepting Bill Clinton). So, if you think it's funny when people fall down, it's even funnier when Presidents do it. This collection of Presidential bloopers presents those rare instances where the "leader of the free world" generally makes a fool of himself.