Venereal disease ruins the life of a young man in this exploitation classic / A call-girl finds herself in a compromising position with her own father. 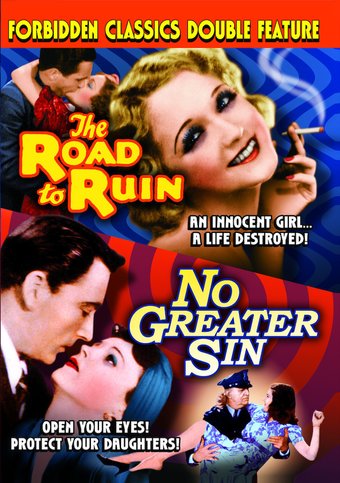 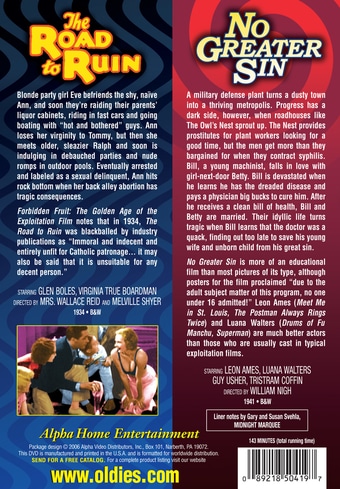 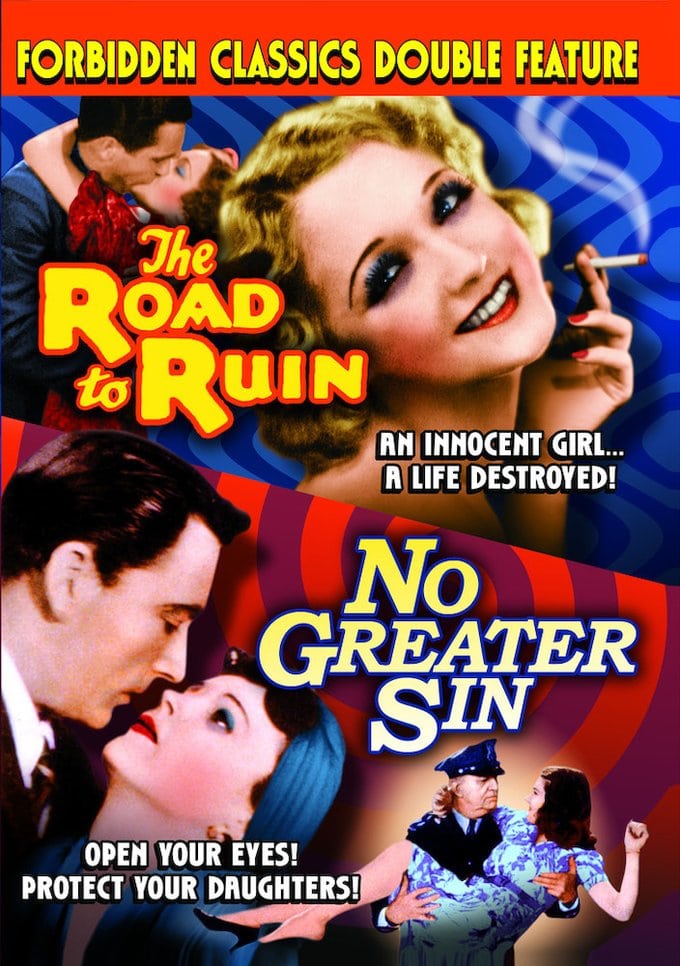 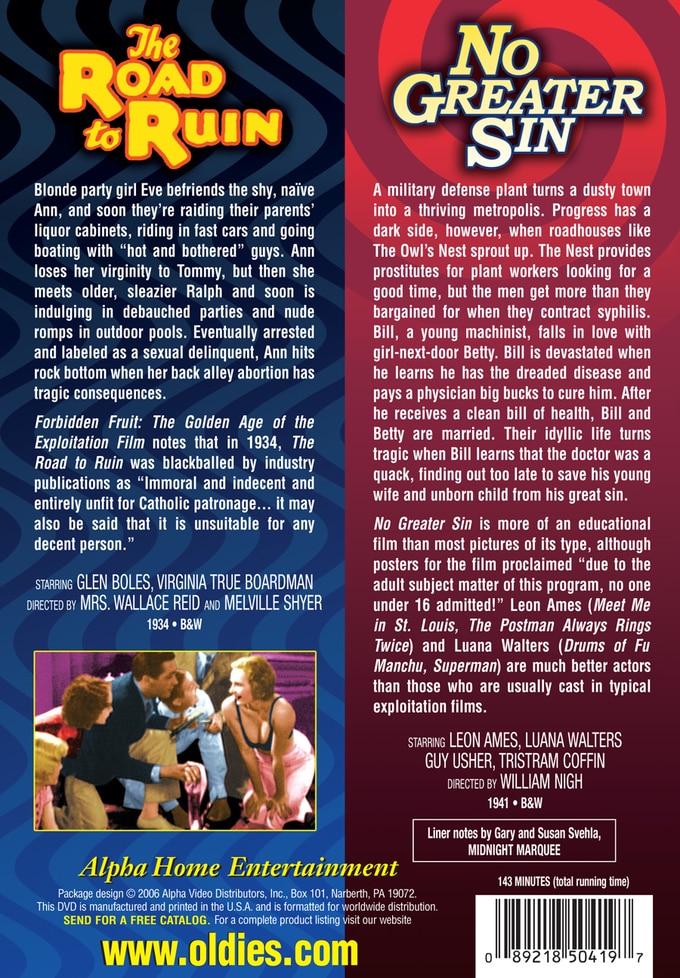 The Road To Ruin (1934, B&W): Blonde party girl Eve befriends the shy, naive Ann, and soon they're raiding their parents' liquor cabinets, riding in fast cars and going boating with "hot and bothered" guys. Ann loses her virginity to Tommy, but then she meets older, sleazier Ralph and soon is indulging in debauched parties and nude romps in outdoor pools. Eventually arrested and labeled as a sexual delinquent, Ann hits rock bottom when her back alley abortion has tragic consequences. The book Forbidden Fruit: The Golden Age of the Exploitation Film notes that in 1934, The Road to Ruin was blackballed by industry publications as "Immoral and indecent and entirely unfit for Catholic patronage... it may also be said that it is unsuitable for any decent person." Starring Glen Boles, Virginia True Boardman. Directed by Mrs. Wallace Reid and Melville Shyer.

No Greater Sin (1941, B&W): A military defense plant turns a dusty town into a thriving metropolis. Progress has a dark side, however, when roadhouses like The Owl's Nest sprout up. The Nest provides prostitutes for plant workers looking for a good time, but the men get more than they bargained for when they contract syphilis. Bill, a young machinist, falls in love with girl-next-door Betty. Bill is devastated when he learns he has the dreaded disease and pays a physician big bucks to cure him. After he receives a clean bill of health, Bill and Betty are married. Their idyllic life turns tragic when Bill learns that the doctor was a quack, finding out too late to save his young wife and unborn child from his great sin.

No Greater Sin is more of an educational film than most pictures of its type, although posters for the film proclaimed "due to the adult subject matter of this program, no one under 16 admitted!" Leon Ames (Meet Me in St. Louis, The Postman Always Rings Twice) and Luana Walters (Drums of Fu Manchu, Superman) are much better actors than those who are usually cast in typical exploitation films. Starring Leon Ames, Luana Walters, Guy Usher, Tristram Coffin. Directed by William Nigh


Nothing beats a lurid, grubby, early 1930's roadshow/exploitation film - the kind which seldom reached the major movie houses, and were made by poverty row studios. Everyone knows the cult exploitation doper Reefer Madness, but a plethora of scare films came out during that era to warn youth to curb their wanton ways, supposedly alert their parents, and curtail the potentiality of socially unacceptable behavior - or so the "square-up" scrolls preceding these films would like us to think. Under the guise of preaching against the sinful excesses of our culture, exploitation films were unregulated by the mainstream Hollywood Production Code, and patrons would line up for blocks to see "daring" films of shocking subject matter under the guise of being warned what young people were getting into, and to be instructed of the dangers of drug abuse and sexual misconduct. Generally these stories concerned respectable teenagers from nice middle class homes who were inadvertently, under the influence of their peers, swept into a seamy party world of drinking, drug use, gambling, strip poker, and sexual experimentation. That first puff of a cigarette or first sip of bootleg hooch at the roadhouse or speakeasy led to dissipated practices resulting in addiction, venereal disease, pregnancy, abortion, and death.

The Road to Ruin combines all of these elements: "nice" high school students who experiment with smoking, drinking, and making out, but woe betide them in the local roadhouse where, after participating in some hilariously mediocre musical numbers, the boys accompanying their dates drink too much and the girls need to be taken home by some older men who are regular customers. Next thing we know, the girls are avid party animals, playing strip games with dice and swimming nude at adult parties, finally rounded up by the local vice squad as "sexual delinquents" . I won't give away the grim end of this cautionary tale, but there's lots of smarmy entertainment in this shabby old shocker and it results in the audience's horrified snicker every second.

Even better than this one, and unfortunately nowhere in print on dvd although another company offers it on vhs, is "Guilty Parents" which even tops Road to Ruin in the vile tale of a Good Girl Gone Bad. Apparently teenage girls were mot to be let out of the sight of their parents or they would be immediately be swept into lives of the most lurid and dissipated of infamous debauchery. This is a film which deserves to be dug up by Alpha and made available on dvd, and soon.

No Greater Sin is a somewhat tiresome, wartime vd instruction film which is of a more ploddingly edifying nature than the rambunctious melodrama of films from the previous decade.