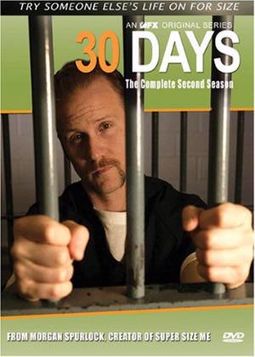 After the enormous success of his 2004 documentary SUPER SIZE ME, Morgan Spurlock expands upon his concept to explore social issues in his FX TV series, 30 DAYS. Each episode sees a participant living for 30 days in an unfamiliar situation, experiencing life in someone else's shoes and gaining insight into a very different way of living. In this second season, Spurlock himself goes to jail to see what it's like to be deprived on his freedom, and an outsourced computer programmer moves to Bangalore to live with Indians working for an American call center. Illegal immigration, atheism, and abortion are only a few of the issues addressed in this collection of six episodes.