A Scottish lad attempts to marry a pretty Irish lassie and join the police force. 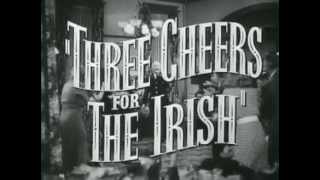 Proud Irish police officer Peter Casey (Thomas Mitchell) is forced into retirement after twenty years of devoted service. To add insult to injury, he's replaced by rookie Angus Ferguson (Dennis Morgan), who, according to Casey, is a "contemptuous Scottishman." While delivering a complaint one night to the Casey apartment, Ferguson meets Casey's eldest daughter, Maureen (Priscilla Lane). The two fall for each other, but fearing the wrath of their feuding families, they hide their romance and elope soon after. Meanwhile, Casey – restless thanks to retirement and quickly becoming a nuisance at home – is convinced to run for alderman. When he finds his campaign flirting with scandal, the forthright Casey inadvertently sparks a brawl and is arrested. At home, Casey has it out with Ferguson while chastising Maureen for befriending him... until Ferguson reveals his secret. The proud Casey may yet win the election, but he might lose something more precious: his daughter.
This product is made-on-demand by the manufacturer using DVD-R recordable media. Almost all DVD players can play DVD-Rs (except for some older models made before 2000) - please consult your owner's manual for formats compatible with your player. These DVD-Rs may not play on all computers or DVD player/recorders. To address this, the manufacturer recommends viewing this product on a DVD player that does not have recording capability.

26%off
Her Highness and the Bellboy
$9.60 Spring Sale
Add to Cart