Don Bryant Don't Give Up On Love 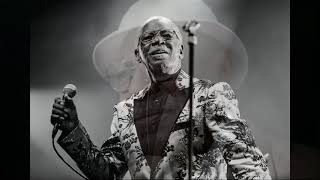 Don Bryant - A Nickel And A Nail (Music Video)

Paste (magazine) - "Frisky and loose, Bryant displays the headlong confidence of a much younger man, perhaps because he never risked vocal burnout from the steady touring chart singles can engender. There's a vibrant, churchy vibe throughout..."

Dedicated to wife Ann Peebles, Don't Give Up on Love is Don Bryant's first secular album since 1969, the same year he placed a co-writing credit on This Is Ann Peebles. Bryant also recorded several singles for Hi Records during the latter half of the '60s, but he settled into penning songs for other artists and spun some gold with his partner, exemplified by "I Can't Stand the Rain." Long after Bryant devoted all his musical energy to the church, Hi Rhythm Section drummer Howard Grimes persuaded the singer to perform with him in the Bo-Keys. Bryant's return to R&B felt so right that it led to Don't Give Up on Love. Recorded in Memphis with several of the Bo-Keys, including Grimes and fellow Hi veterans Charles Hodges (organ) and Hubby Turner (keyboards), as well as bandleader Scott Bomar (bass), it stays true to the tradition of late-'60s/early-'70s Memphis soul. Much of that has to do with the enduring might of Bryant's voice. It seizes attention on the opening cover of Vernon Morrison and Don Robey's "A Nickel and a Nail" -- popularized by O.V. Wright, for whom Bryant wrote material -- and seldom loosens its grip through a set that is mostly originals composed by Bryant either alone or with Bomar. Out of the new songs, "How Do I Get There" is the standout, a resolute hybrid of gospel, blues, and soul where Bryant sings about the promise of the afterlife. Bryant also goes all the way back to 1960 for an update of "I Got to Know," which he wrote for vocal group the "5" Royales, and revisits his "It Was Jealousy," recorded separately during the early '70s by Otis Clay and Peebles. This is one pleasant and pleasing surprise. ~ Andy Kellman

Don Bryant
You Make Me Feel
$19
Add to Cart