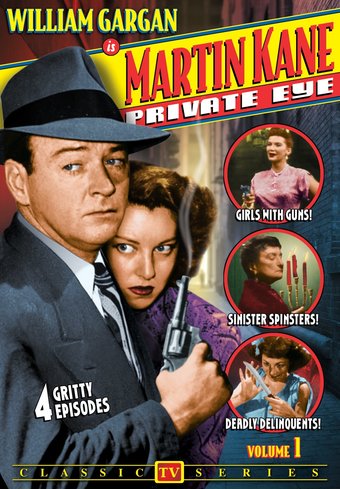 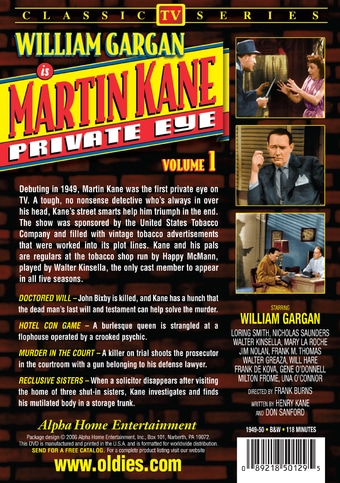 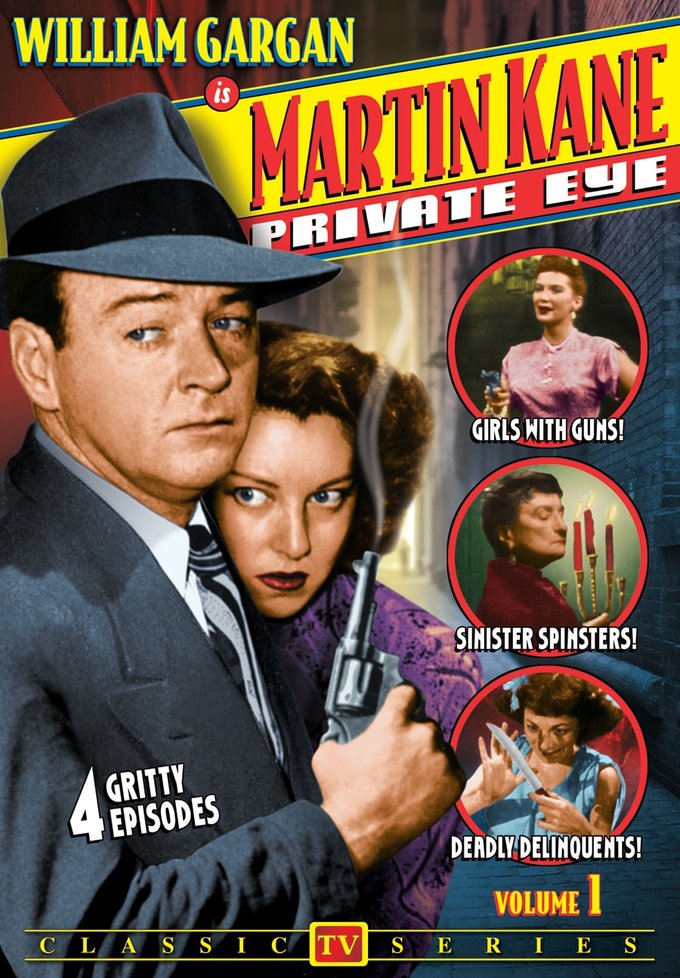 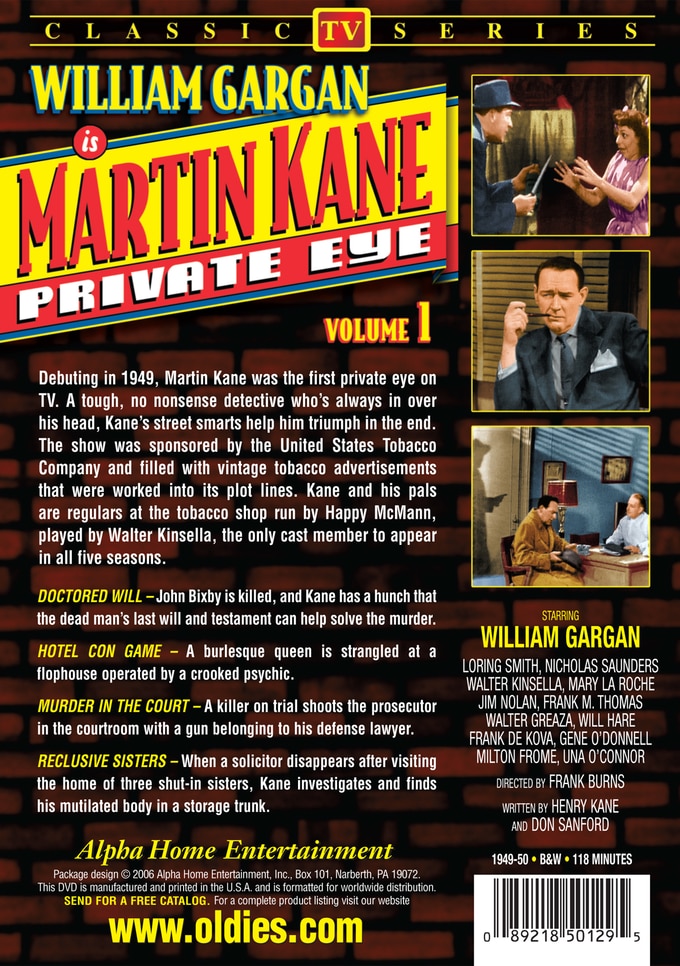 Debuting in 1949, Martin Kane was the first private eye on TV. A tough, no nonsense detective who's always in over his head, Kane's street smarts help him triumph in the end. The show was sponsored by the United States Tobacco Company and filled with vintage tobacco advertisements that were worked into its plot lines. Kane and his pals are regulars at the tobacco shop run by Happy McMann, played by Walter Kinsella, the only cast member to appear in all five seasons.

DOCTORED WILL: John Bixby is killed, and Kane has a hunch that the dead man's last will and testament can help solve the murder.

HOTEL CON GAME: A burlesque queen is strangled at a flophouse operated by a crooked psychic.

MURDER IN THE COURT: A killer on trial shoots the prosecutor in the courtroom with a gun belonging to his defense lawyer.

RECLUSIVE SISTERS: When a solicitor disappears after visiting the home of three shut-in sisters, Kane investigates and finds his mutilated body in a storage trunk.

The world's first television private detective, MARTIN KANE PRIVATE EYE gradually became a big hit as America tuned in to watch the affable yet street-smart detective take on the crooks of New York City. The show ran for five seasons with several different actors playing the role of Kane. Each manifestation of the gumshoe had a different style and attitude, but all, invariably, spent a lot of time in Happy McMann's Tobacco Shop (the show was sponsored by U.S. Tobacco). Like much of early television, the sets, props, plots, and extras left much to be desired, but Kane's wise-cracking mix of cynicism and sentimentality, and the juicy nature of the crimes, kept people coming back for more. Volume one features four vintage Kane cases: Kane finds the clues to man's murder in his will, a burlesque dancer is strangled at a flophouse operated by a disreputable psychic, a killer on trial murders the prosecuter in the courtroom, and Kane find the mutilated body of a solicitor in a trunk owned by three reclusive sisters.

Television Programs | Television / TV Series
This product is made-on-demand by the manufacturer using DVD-R recordable media. Almost all DVD players can play DVD-Rs (except for some older models made before 2000) - please consult your owner's manual for formats compatible with your player. These DVD-Rs may not play on all computers or DVD player/recorders. To address this, the manufacturer recommends viewing this product on a DVD player that does not have recording capability.


These early episodes of "Martin Kane Private Eye" give a wonderful glimpse into a lost world--the world of LIVE TV Drama. To watch these actors and realize the pressure they are under to get it right the first time, is amazing. Not only that, but the technical aspects of the show are a sheer joy. The director and his tech staff work very hard to keep the show from becoming a videoed stage play. I cannot recommend these DVDs enough and a big THANKS to Alpha Video for making these wonderful shows available!


I found this TV series to be very charming in a old-fashioned way. It is a bit slow at times, But for the most part the pacing is good, as is the directing, writing and acting. The plugs for Tobacco just add to the fun, and seem to suit the storylines quite well.
This show was "Kinescope Recorded", NOT videotaped. A "Kinescope Recording" was a primitive way to record LIVE tv shows on film, using a motion picture camera and a TV monitor.
Overall it's quite enjoyable, and much better than some shows on TV today.

Martin Kane solves the mystery of where to buy fine tobbacco products! Movie Lover: call me Z from somewhere out there -- May, 12, 2006


Half the fun of watching this very-dated (shot live on weird-looking old videotape) detective show is seeing how they're going to fit in the next plug for "Old Briar." As a mystery, it's an okay show, sometimes a little slow (airing in the days when just the novelty of seeing ANYthing on TV was working for it) but not bad. It's entertaining enough, and worth watching out of historical curiosity. The theme song will drive you crazy, though...