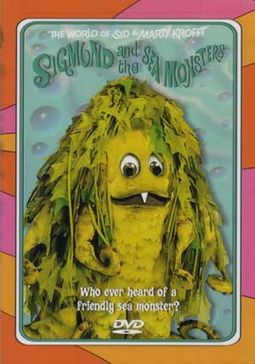 15 ratings
Currently Out of Stock: We'll get more as soon as possible
Notify Me When Available
Add to Wishlist
Format:  DVD
item number:  S4VG
Related products:
Pufnstuf for $12.50
Surface - Complete Series (4-DVD) for $24.90
91% recommend us!

From Sid & Marty Krofft comes another popular TV series about a sea monster who doesn't really want to scare anyone.

"Happy Birthdaze": Sweet Mama's trying to get Blurp and Slurp to clean up for Big Daddy's birthday celebration. Being lazy sea monsters, they decide to get Sigmund to do the dirty work. When Johnny and Scott come home, they find a suspicious piece of seaweed.

"The Nasty Nephew": When Aunt Zelda's annoying nephew, Leroy, comes to visit, Johnny and Scott must be doubly careful to keep Sigmund out of sight. Leroy follows the boys to the Ooze family cave, where he gets more than he bargained for.

"Monster Rock Festival": Sigmund talks Johnny and Scott into entering a radio station music contest. When they win, it's all the boys can do to keep their lead singer's identity a secret, especially with Blurp and Slurp chasing them around.

"Ghoul School Days": After getting Johnny and Scott in trouble with Zelda, Sigmund thinks it best that he run away. The boys read his note and rush out to find him. Meanwhile, back at the cave, Blurp and Slurp's principal is checking on Sigmund's absentee record.