A woman on a mission to clear her brother of murder charges is shipwrecked on a tropical island with a group of worldly strangers. 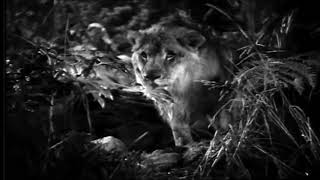 Doris Evans' brother is on Death Row and she's certain he is innocent. She suspects the real killer is out-of-work actor, Gordon Wayne, and she enlists her fiance, self-righteous reporter John Franklin, to help bring the man to justice. The pair book passage on an ocean liner that Wayne and his pal Eddie are traveling on, but their plans are dashed when the ship runs aground on a reef, killing almost everyone aboard. Washed ashore on a deserted jungle island, Doris, John, Gordon and Eddie strike an uneasy alliance to survive. When the woman is attacked by a lion and saved by knife-wielding Gordon Wayne, her fickle heart causes her to abandon the norms of civilization as she succumbs to the passionate call of the jungle.

Jungle Bride is an epic yarn of forbidden love and perilous adventure, powered by vivid scenes of shipwreck and vicious animal attacks. Action director Harry O. Hoyt is most noted in film history as the director of 1925's silent classic The Lost World, which featured stop-action dinosaurs animated by Willis O'Brien. O'Brien went on to animate filmdom's greatest monster in King Kong, released in 1933, the same year as Jungle Bride. Coincidentally, 1933 was also the year that Jungle Bride's rugged leading man, Charles Starrett, helped to organize the fledgling Screen Actors Guild. Starrett gained wide-spread popularity in the 40s playing The Durango Kid in dozens of films. Petite blonde Anita Page was a Hollywood favorite in the late 20s and early 30s following a string of box-office hits, including three with Joan Crawford (Our Dancing Daughters (1928), Our Modern Maidens (1929) and Our Blushing Brides (1930)), two opposite Buster Keaton (Free and Easy (1930) and Sidewalks of New York (1931)) and a critically acclaimed turn in 1929's Best Picture winner, The Broadway Melody. At the peak of her career in 1929, she was flooded by over 10,000 fan letters a week, including over 100 from an obsessed long-distance suitor - Italian dictator Benito Mussolini.

When an ocean liner sinks near the African coast, four survivors wind up on a jungle island, one of them pursuing another for a crime. Intrigue and romance follow.

Action | Adventure | Thriller | Vintage | Jungle
This product is made-on-demand by the manufacturer using DVD-R recordable media. Almost all DVD players can play DVD-Rs (except for some older models made before 2000) - please consult your owner's manual for formats compatible with your player. These DVD-Rs may not play on all computers or DVD player/recorders. To address this, the manufacturer recommends viewing this product on a DVD player that does not have recording capability.

George of the Jungle
$6 Super Savings
Add to Cart

Customer Rating:
Based on 144 ratings.


Very good pre-code Hollywood adventure that, unfortunately, is not the best video quality. Anita Page is gorgeous and sexy and some of her scenes would have been censored had the film been made a year later. The film is not burdened with stock animal footage and has only one vicious animal attack (which looks quite realistic) not many as the box implies. Jungle Bride is apparently a rare film (not even Tuner Classic Movies has it) and even finding a print was probably a chore. There are film scratches, minor sound breakups but good clarity is the main problem. It is watchable but be advised there are scenes that are very bright while others are dark. The saving grace: these problems generally do not affect Anita Page’s scenes. If you are a fan of Anita Page, you’ll want this film despite the problems.

93%off
The Who / Various Artists
The Who and Friends In Concert - TCT: Concert For Teenage... TOP 25 Bestselling DVD
99¢ on Sale
Add to Cart
(2)
Film Collectors & Archivists: Alpha Video is actively looking for rare and unusual pre-1943 motion pictures, in good condition, from Monogram, PRC, Tiffany, Chesterfield, and other independent studios for release on DVD. We are also interested in TV shows from the early 1950s. Share your passion for films with a large audience. Let us know what you have.
How to Order
Shipping Rates & Options
International Shipping
Return Policy
Request a FREE Catalog
Order Items by Catalog
View Catalogs Online
Safe Shopping Guarantee
Buy a Gift Certificate
About OLDIES.com
Customer Reviews
Contact Info
Privacy Policy
Send Feedback
Login
Forgot Password?
Sign Out
Email Subscriptions
Redeem Gift Certificate
To place an order or for customer service, call toll-free 1-800-336-4627 or outside the United States, call 1-610-649-7565
Open Monday-Friday: 9am-10pm, Weekends: 11am-7pm (Eastern Time)
Se habla Español! Spanish-speaking representatives available, Monday-Friday: 9am-5pm (Eastern Time)
Portions of this page © 2021 TiVo Corporation. For personal non-commercial use only. All rights reserved.
© 2021 OLDIES.com and its affiliates and partner companies. All rights reserved.