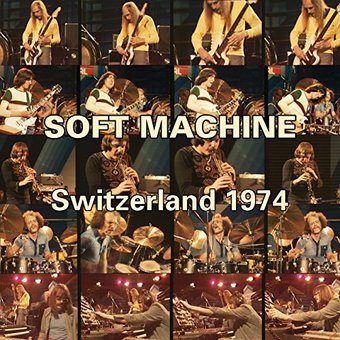 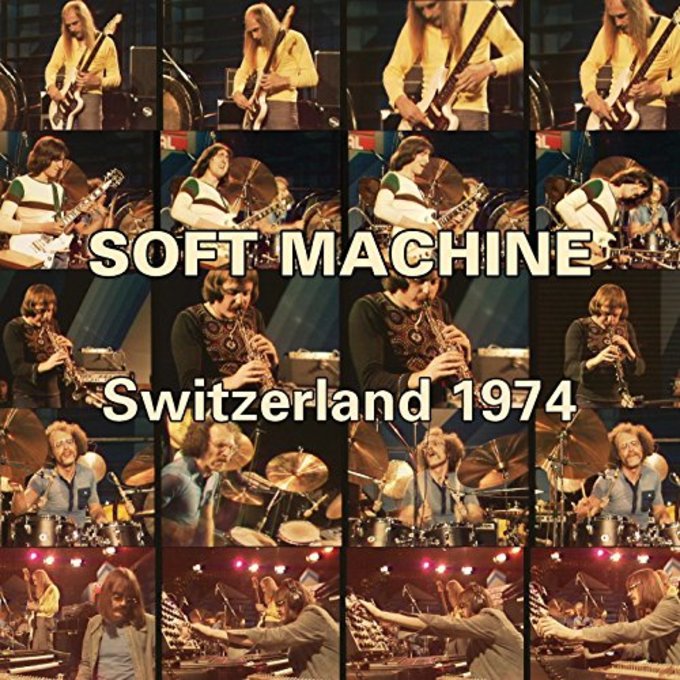 Personnel: Allan Holdsworth (vocals, guitar); Karl Jenkins (oboe, soprano saxophone, piano, Fender Rhodes piano); Mike Ratledge (Fender Rhodes piano); John Marshall (drums, percussion).
Liner Note Author: Aymeric Leroy.
Recording information: Congress Hall, Montreux, Switzerland (07/04/1974).
Cuneiform's list of stellar Soft Machine archival releases grew longer in February 2015 with this CD/DVD set documenting the group's appearance at the storied Montreux Jazz Festival on July 4, 1974. Switzerland 1974 captures the Softs taking a huge leap into electric guitar-augmented jazz-rock thanks to formidable axeman Allan Holdsworth's addition to the lineup of keyboardist/reedman Karl Jenkins, drummer John Marshall, bassist Roy Babbington, and keyboardist (and only original bandmember) Mike Ratledge. Jenkins, Marshall, Babbington, and Ratledge had appeared on Soft Machine's final CBS/Columbia album, 1973's Seven and, as Aymeric Leroy writes in the Switzerland 1974 liners, Holdsworth's arrival signaled such a radical departure for the Softs that they dropped their existing repertoire and introduced a set of all-new music on tours leading up to the Montreux show, music that would shortly thereafter be recorded for 1975's Bundles, the band's first album on the Harvest label. So the Montreux set documented here -- essentially a Bundles preview plus solo/duo interludes -- is markedly different than the group's previous output, but the Softs weren't making an entirely clean break with the past either. The Jenkins-penned angular and propulsive opus "Hazard Profile" introduces Holdsworth's mind-boggling, lightning-fingered fretwork in all its unstoppable force -- and with his later signature fluidity not quite fully in place, his picking actually has some extra bite -- but unlike the studio version on Bundles, this "Hazard Profile" also offers up some classic Canterbury sounds in Babbington's fuzz bass (a clear tip of the hat to Hugh Hopper given a full airing on the Babbington solo showcase "Ealing Comedy") and Ratledge's burning organ tone.
Ratledge hadn't completely abandoned his signature Lowrey sound in live performance even over a year later (as documented on Major League Productions' 2005 British Tour '75), but the keyboardist stopped trotting it out in the studio, so Switzerland 1974, in contrast to Bundles itself, provides the distinct pleasure of hearing -- and seeing -- Holdsworth cut loose on an album that also features scattered bits of Ratledge's inimitable Softs organ stylings (also heard during the "Lefty" collective improvisation/"Penny Hitch" coda). And as for the "seeing," the DVD video is essential; it's a five-camera shoot with -- for the most part -- each camera focused where you want it to be: on the musicians who are actually playing. Sometimes the camera might even get a bit too close to fingers flying on a fretboard or tweaking AKS synthesizer knobs -- but hey, the right guy is usually on-screen (and when seen as well as heard, Marshall's powerful, crisp, precise, and inventive drumwork is particularly impressive to behold). Be forewarned about rough patches in both the audio and video, but also rest assured that Udi Koomran's audio restoration and mastering could not be improved upon. And thanks to Cuneiform, you can now get close enough to watch Mike Ratledge's hands on the keys reflected in his sunglasses. For Soft Machine diehards, what could be better? ~ Dave Lynch

75%off
Fattburger
Living in Paradise
$3.98 on Sale
Add to Cart