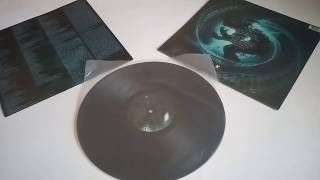 Personnel: David Draiman (vocals, background vocals); Dan Donegan (guitar, piano, electronics, background vocals); John Moyer, Kevin Churko (keyboards, programming); Mike Wengren (drums, percussion, background vocals).
Audio Mixer: Kevin Churko.
Recording information: The Hideout Studio, Las Vegas.
Illustrator: Raymond Swanland.
Coming off of the enormous success of their brooding cover of Simon & Garfunkel's "Sounds of Silence," Chicago nu-metal veterans Disturbed deliver another slab of commercial grade active rock and montage-ready power balladry on their seventh studio effort, Evolution. Billed as a tribute to deceased contemporaries Chester Bennington of Linkin Park and Vinnie Paul of Pantera, the ten-track set strikes an even balance between meat-and-potatoes stadium shakers ("Are You Ready," "No More") and butane-draining acoustic numbers ("Hold On to Your Memories," "Already Gone"). Working once again with producer Kevin Churko -- bass player and backing vocalist John Moyer, who left in 2011 to tear things up in Adrenaline Mob and Art of Anarchy, has also returned -- the band's penchant for pairing uncompromising sonic heft with mile high hooks remains its greatest asset, with frontman Dave Draiman's powerhouse voice shouldering that weight with Herculean stamina. The electronic elements that began creeping in on 2015's Immortalized are utilized to an even greater degree this time around, but Moyer, guitarist Dan Donegan, and drummer Mike Wengren are always at the forefront, maintaining the road ahead with workmanlike precision. Disturbed play to their strengths, and why shouldn't they? Stringing together five consecutive number one debuts is no small feat, and while it's hard to argue that Evolution lives up to its moniker, the familiarity of the architecture is lent considerable gravitas by the overall execution, which as per usual, leaves nothing but perspiration in its wake -- Draiman did remove his very '90s goatee and signature chin piercings, citing a desire to not look like a "45-year old Hot Topic kid," so there is that. ~ James Christopher Monger