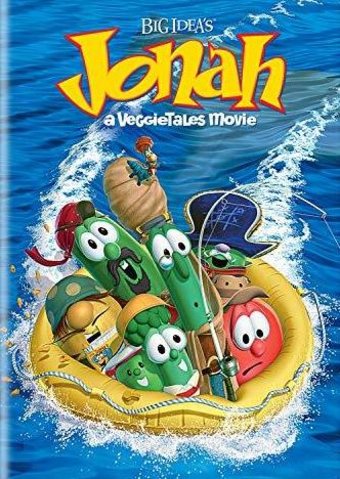 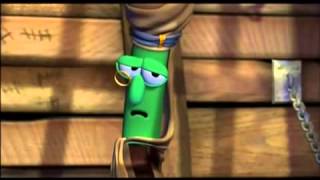 Based on the popular children's series, JONAH: A VEGGIE TALES MOVIE gives computer-animated talking vegetables their feature film debut. Bob the Tomato, Laura Carrot, and company seek shelter in a remote seafood restaurant after having a van accident en route to a concert. In the next booth, a band of "pirates who do nothing," led by Larry the Cucumber (voiced by Mike Nawrocki) tell them the biblical story of Jonah and the Whale, with Jonah in this case played by an uptight asparagus (voiced by Phil Vischer). Adults unfamiliar with the series may be startled at first by the unusual combination of Bible studies and talking produce (as well as the high-pitched, Monty Python style vocalizing) but those already VEGGIE-savvy should get right into it. In addition to the goofy humor, there are lessons to learn about compassion and mercy, so parents might notice a lull in inter-sibling bickering afterwards. They'll also find the crazy sight gags and clever songs help put the whole thing over, particularly the big show-stopper: a gospel choir of African-American angel asparagus (vocalized by Anointed), who appear to Jonah inside the whale and belt out the roof-raising number "Second Chances."

50%off
VeggieTales
The Pirates Who Don't Do Anything - A VeggieTales Movie
$4.98 on Sale
Add to Cart

16%off
The Indian in the Cupboard
$8.40 Super Savings
Add to Cart

40%off
VeggieTales
Sweetpea's Songs for Girls
$6
Add to Cart