Guest In The House

No girl has ever been called more names! That's Evelyn...the guest...who manages to throw her pretty shadow around where any man near must see it - and when it comes to a man she grants no rights to anyone but herself! 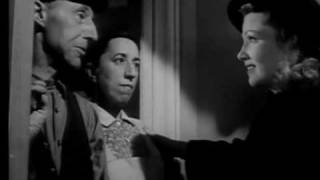 Dr. Dan Proctor is in love with his sickly patient, Evelyn Heath, and brings her to his idyllic home in Maine, where she is welcomed by his picture perfect family for a recuperative summer stay. In her efforts to steal away Dan's married brother Douglas, Evelyn proceeds to wreak havoc on every member of the household with her neuroses and manipulative behavior. Her victory seems assured, until Aunt Martha appears, determined to put an end to Evelyn's schemes.

An accomplished cast highlights this film-noir production directed by John Brahm. Ann Baxter's role foreshadows her classic, Oscar-nominated performance as Eve Harrington in All About Eve (1950). Ralph Bellamy was one of Hollywood's most popular, versatile, and long-lived actors. In 1958, he won a Tony Award as Best Actor for his dramatic role as Franklin Delano Roosevelt in Sunrise at Campobello. Ruth Warrick was a member of Orson Welles' Mercury Theatre troupe and is best remembered for her role in the classic Citizen Kane (1941). Margaret Hamilton's face is instantly recognizable as the Wicked Witch of the West in The Wizard of Oz (1939). Guest In The House earned an Oscar nomination for Original Score.

Baxter once again proves to be a wolf in sheep's clothing as a manipulative young woman who moves in with the family of her betrothed (Bellamy, for once not the jilted suitor) who also happens to be her psychiatrist. She gradually turns the house full of happy, loving people against each other, and they are powerless to stop her. Academy Award Nominations: Best Scoring of a Dramatic or Comedy Picture.

Family Interaction | Psychodrama | Suspense | Thriller | Illness
This product is made-on-demand by the manufacturer using DVD-R recordable media. Almost all DVD players can play DVD-Rs (except for some older models made before 2000) - please consult your owner's manual for formats compatible with your player. These DVD-Rs may not play on all computers or DVD player/recorders. To address this, the manufacturer recommends viewing this product on a DVD player that does not have recording capability.

The Accused
$19
Add to Cart

25%off
Bizarre Cartoons of The Past TOP 25 Bestselling DVD
$5.95 on Sale
Add to Cart
(20+)
Film Collectors & Archivists: Alpha Video is actively looking for rare and unusual pre-1943 motion pictures, in good condition, from Monogram, PRC, Tiffany, Chesterfield, and other independent studios for release on DVD. We are also interested in TV shows from the early 1950s. Share your passion for films with a large audience. Let us know what you have.
How to Order
Shipping Rates & Options
International Shipping
Return Policy
Request a FREE Catalog
Order Items by Catalog
View Catalogs Online
Safe Shopping Guarantee
Buy a Gift Certificate
About OLDIES.com
Customer Reviews
Contact Info
Privacy Policy
Send Feedback
Login
Forgot Password?
Sign Out
Email Subscriptions
Redeem Gift Certificate
To place an order or for customer service, call toll-free 1-800-336-4627 or outside the United States, call 1-610-649-7565
Open Monday-Friday: 9am-10pm, Weekends: 11am-7pm (Eastern Time)
Se habla Español! Spanish-speaking representatives available, Monday-Friday: 9am-5pm (Eastern Time)
Portions of this page © 2020 TiVo Corporation. For personal non-commercial use only. All rights reserved.
All copyrights, trademarks, and logos are owned by their respective owners. Rotten Tomatoes content and Certified Fresh™ Logo is Copyright © Fandango. All rights reserved.
© 2020 OLDIES.com and its affiliates and partner companies. All rights reserved.