I CONFESS! I PLAYED AT LOVE BUT MURDER WAS MY BUSINESS! 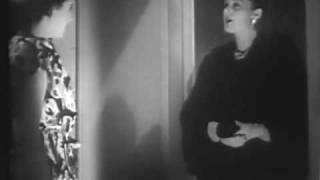 Beautiful Vicki McGuire (Mary Beth Hughes) plans to marry Larry Craig (Hugh Beaumont) until she gets a horrific warning one night from Norma, his long-lost wife. Norma refuses to divorce her husband, despite the fact that she no longer loves him. Shortly thereafter, Norma is brutally murdered, and menacing police officer Captain Brown considers Vicki and Larry to be the prime suspects. Vicki decides to take matters into her own hands and she soon finds herself in a world filled with shady characters and deadly peril.

Hugh Beaumont went on to play a very different role as Ward Cleaver in the TV series "Leave It To Beaver" (1957-1963). Prolific director Sam Newfield helmed over 270 films and countless early television shows. Mary Beth Hughes is a cult favorite for her roles in 1940s' B movies I Accuse My Parents, Charlie Chan in Rio, The Great Flamarion, Inner Sanctum and notably the 20th Century Fox landmark western, The Ox-Bow Incident.

A woman is forced to commit a murder in order to protect her lover.