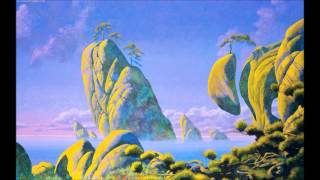 Uriah Heep: Mick Box (vocals, guitar); Phil Lanzon (vocals, keyboards); Trevor Bolder (vocals, bass); Lee Kerslake (vocals, drums); Bernie Shaw (vocals).
Additional personnel: Piet Sielck (keyboards); Rolf Kohler, Pete Beckett (background vocals).
Recorded at Karo Studio, Brackel, Germany.
Personnel: Mick Box (vocals, guitars); Phil Lanzon (vocals, keyboards); Trevor Bolder (vocals, bass guitar); Lee Kerslake (vocals, drums); Bernie Shaw (vocals); Jim Hughes (guitar); John Welch (keyboards); Rolf K”hler, Peter Beckett (background vocals).
Liner Note Author: Malcolm Dome.
Recording information: KARO Studio, Brackel, Germany (1994-11-23_1994-12-20&1995-).
Photographer: Dirk Zumpe.
Although they had continued to record steadily after making a comeback with 1982's Abominog, Uriah Heep had slipped off the heavy metal world's radar by the mid-1990s. Just the same, they manage to notch up an impressive and well-received album in 1995 with Sea of Light. The key to this album's success is that it forsook the ill-judged pop metal stylings of albums like Equator for a return to the gothic-tinged old-school metal style that highlighted classic Uriah Heep albums like Look at Yourself. A great example is "A Time of Revelation," a gutsy rock tune that glides forwards on a one-two-three punch of thick guitar work, rousing organ riffs, and several layers of operatic vocal harmonies. Meanwhile, "Against the Odds" resurrects the operatic feel of the group's early work, and "Sweet Sugar" is a gritty rocker that could have easily fit in on Return to Fantasy. However, the classic rock punch of Sea of Light is tempered with a mature lyrical outlook that forsakes the Dungeons and Dragons themes of their 1970s output and the AOR-styled love lyrics of their 1980s albums for a world-conscious outlook. Sometimes they get a bit carried away when they try for the message song ("Universal Wheels" lays it on a little too thick, especially when it starts working in faux news report sound bites about the world's problems), but the positivism expressed in tunes like "Spirit of Freedom" and "Logical Progression" is appealing, and these lyrics effectively complement the generally anthemic tone of the music. In the end, Sea of Light may be a little too old-fashioned for rockers accustomed to Metallica and Megadeth, but those who enjoy the heavier side of classic rock will find plenty of old-school pleasures on this disc. ~ Donald A. Guarisco