7 ratings
Currently Out of Stock: We'll get more as soon as possible
Notify Me When Available
Add to Wishlist
Format:  DVD
sku:  XMLCR 52754D
Related products:
The Decade You Were Born: The 70s - A Decade of Cultural Awakening for $7.90
1001 Classic Commercials (3-DVD) for $8.98
History Channel: World Trade Center - In Memoriam for $8.70
Our customers love us! 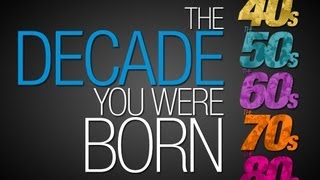 If you were born in the 60s, your decade opened with John F. Kennedy as the 35th President of the United States ... the cartoon The Flintstones appeared on Television for the first time ... Chubby Checker started a new dance craze with the sensational twist ... the U.S. men s ice hockey team won gold in the winter Olympics at Squaw Valley, California ... and Alan Shepard made the first U.S. space fight.