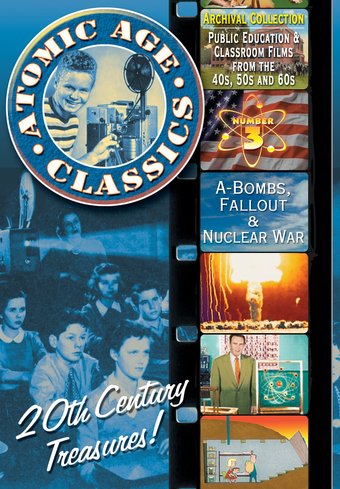 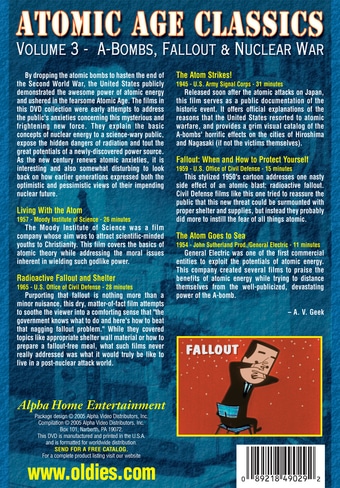 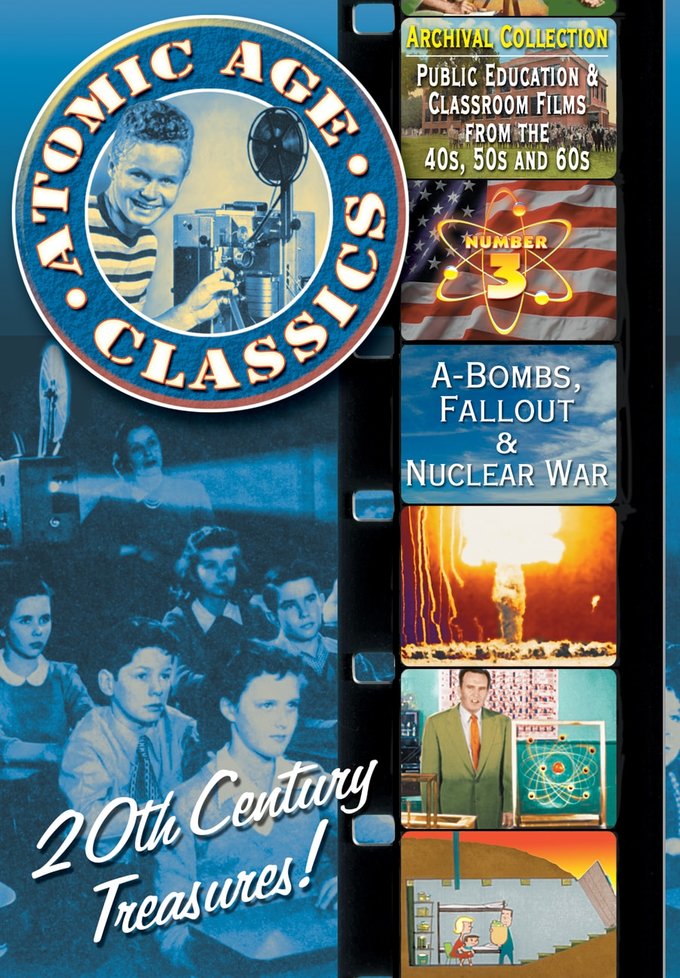 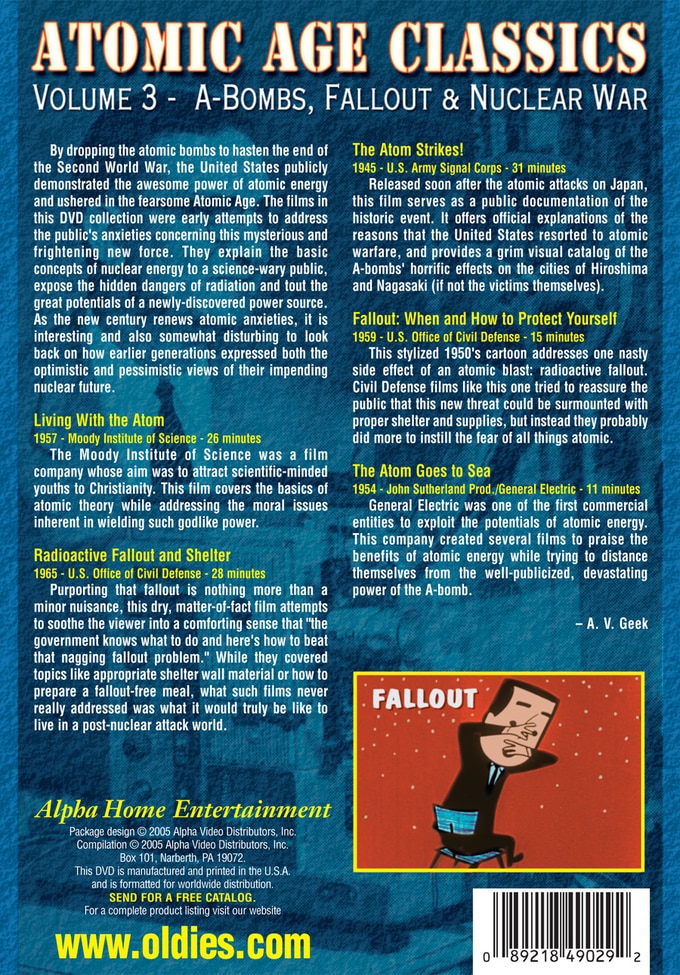 By dropping the atomic bombs to hasten the end of the Second World War, the United States publicly demonstrated the awesome power of atomic energy and ushered in the fearsome Atomic Age. The films in this DVD collection were early attempts to address the public's anxieties concerning this mysterious and frightening new force. They explain the basic concepts of nuclear energy to a science-wary public, expose the hidden dangers of radiation and tout the great potentials of a newly-discovered power source. As the new century renews atomic anxieties, it is interesting and also somewhat disturbing to look back on how earlier generations expressed both the optimistic and pessimistic views of their impending nuclear future.

Radioactive Fallout and Shelter (1965; U.S. Office of Civil Defense; 28 minutes): Purporting that fallout is nothing more than a minor nuisance, this dry, matter-of-fact film attempts to soothe the viewer into a comforting sense that "the government knows what to do and here's how to beat that nagging fallout problem." While they covered topics like appropriate shelter wall material or how to prepare a fallout-free meal, what such films never really addressed was what it would truly be like to live in a post-nuclear attack world.

The Atom Strikes! (1945; U.S. Army Signal Corps; 31 minutes): Released soon after the atomic attacks on Japan, this film serves as a public documentation of the historic event. It offers official explanations of the reasons that the United States resorted to atomic warfare, and provides a grim visual catalog of the A-bombs' horrific effects on the cities of Hiroshima and Nagasaki (if not the victims themselves).

Fallout: When and How to Protect Yourself (1959; U.S. Office of Civil Defense; 15 minutes): This stylized 1950's cartoon addresses one nasty side effect of an atomic blast: radioactive fallout. Civil Defense films like this one tried to reassure the public that this new threat could be surmounted with proper shelter and supplies, but instead they probably did more to instill the fear of all things atomic.

The Atom Goes to Sea (1954; John Sutherland Prod./General Electric; 11 minutes): General Electric was one of the first commercial entities to exploit the potentials of atomic energy. This company created several films to praise the benefits of atomic energy while trying to distance themselves from the well-publicized, devastating power of the A-bomb.

This collection of short films were produced in the mid-20th century, with subject matter centered around the fears that gripped the world as people came to terms with the nuclear threat. The films included are: "Living With the Atom" (1957), which aimed to convert budding young scientists to Christianity; "Radioactive Fallout and Shelter" (1965), which was one of the many government-produced films--which, in retrospect, seem incredibly naïve--on what to do in the event of a nuclear attack; "The Atom Strikes!" (1945), which was a post-Hiroshima/Nagasaki film on why the bomb was dropped; "Fallout: When and How to Protect Yourself" (1959), which is a cartoon about radioactivity and its effects; and "The Atom Goes to Sea" (1954), which was produced by General Electric, and attempted to show why atomic power is a great invention, despite the terrible effects it has when used in a nuclear weapon.


This collection of short films is a nostalgic look back at an age where the world lived in constant fear of nuclear war. Through the camera lens, we are taken back to the 50s and 60s, which was the heyday of films that dealt with fallout, how to survive nuclear war, and other, more positive uses of nuclear power. The four shorts in this DVD take a look at how to solve the "little" problem of fallout, such as how to wipe off that "pesky" fallout dust from a loaf of bread; what happens in nuclear fission, through a science class lesson in basic nuclear physics, with a "moral" message at the end; a more realistic look at how to deal with the dangers of radioactive fallout; a rare 1945 film from the then Department of War about the aftermath of the atomic bomb attacks on Hiroshima and Nagasaki, produced by the War Department; and a look at a peacetime use for nuclear power in submarines. Altogether, this DVD highlights some of the more serious and silly nuclear films from days gone by. It is a delightful trip back into the past.