Campy fifties and sixties vintage documentaries that were shown to us in grammar school. 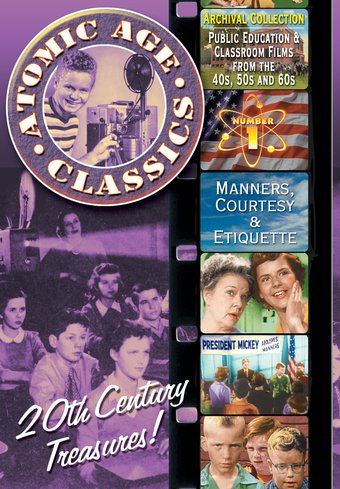 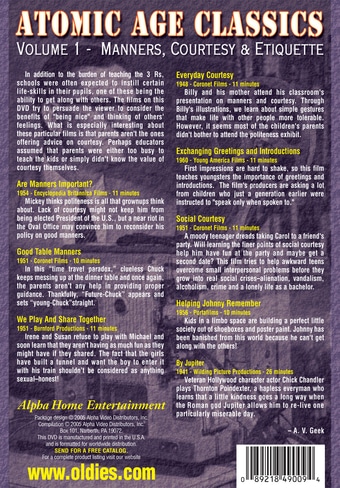 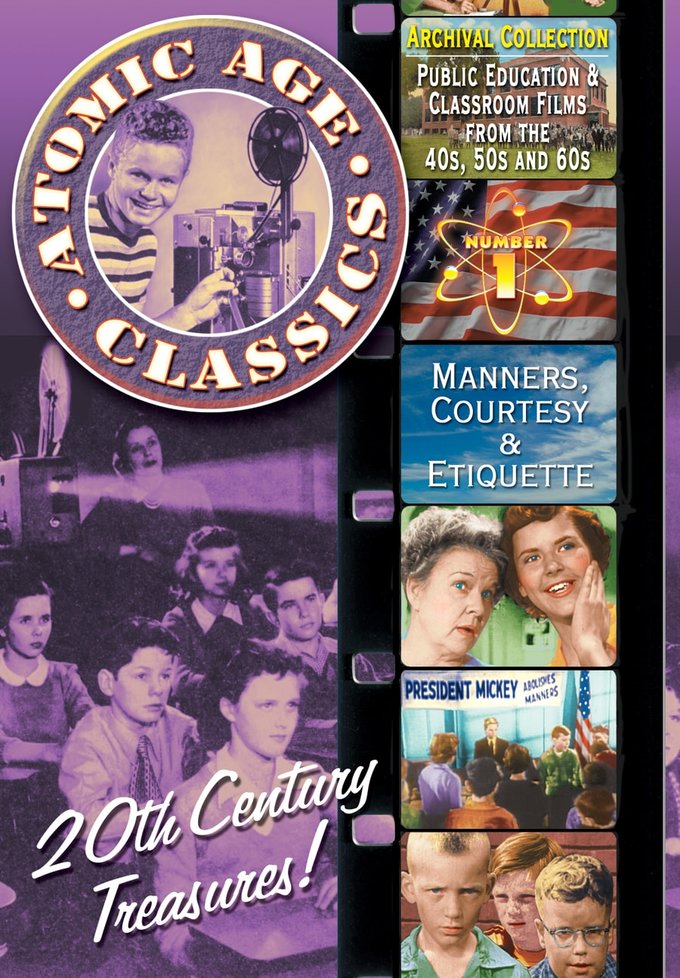 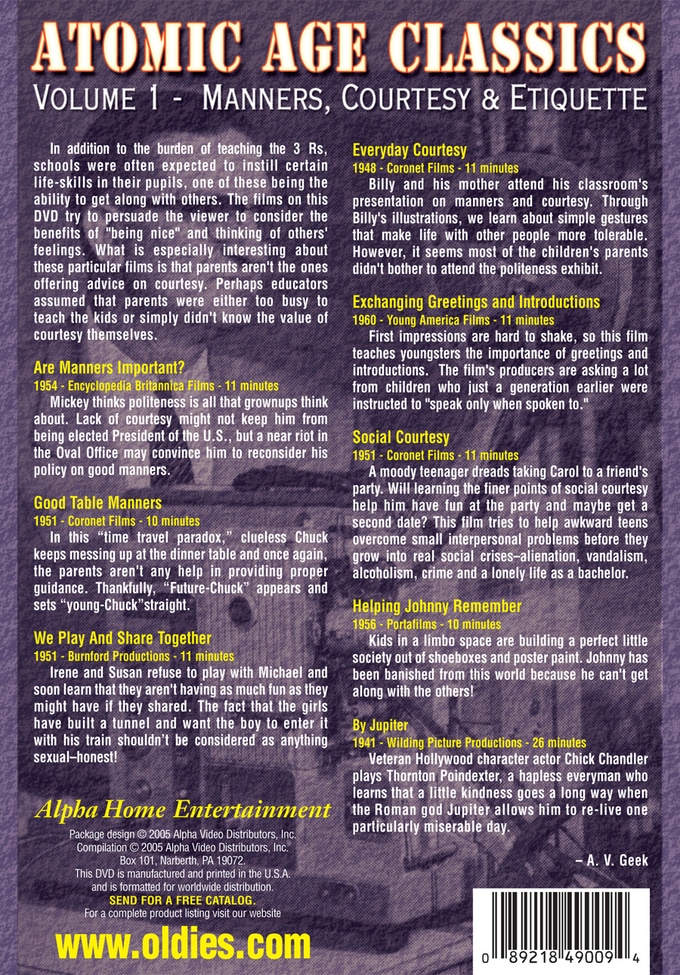 In addition to the burden of teaching the 3 Rs, schools were often expected to instill certain life-skills in their pupils, one of these being the ability to get along with others. The films on this DVD try to persuade the viewer to consider the benefits of "being nice" and thinking of others' feelings. What is especially interesting about these particular films is that parents aren't the ones offering advice on courtesy. Perhaps educators assumed that parents were either too busy to teach the kids or simply didn't know the value of courtesy themselves.

Are Manners Important? (1954; Encyclopedia Britannica Films; 11 minutes): Mickey thinks politeness is all that grownups think about. Lack of courtesy might not keep him from being elected President of the U.S., but a near riot in the Oval Office may convince him to reconsider his policy on good manners.

We Play And Share Together (1951; Burnford Productions; 11 minutes): Irene and Susan refuse to play with Michael and soon learn that they aren't having as much fun as they might have if they shared. The fact that the girls have built a tunnel and want the boy to enter it with his train shouldn't be considered as anything sexual-honest!

Everyday Courtesy (1948; Coronet Films; 11 minutes): Billy and his mother attend his classroom's presentation on manners and courtesy. Through Billy's illustrations, we learn about simple gestures that make life with other people more tolerable. However, it seems most of the children's parents didn't bother to attend the politeness exhibit.

Exchanging Greetings and Introductions (1960; Young America Films; 11 minutes): First impressions are hard to shake, so this film teaches youngsters the importance of greetings and introductions. The film's producers are asking a lot from children who just a generation earlier were instructed to "speak only when spoken to."

Social Courtesy (1951; Coronet Films; 11 minutes): A moody teenager dreads taking Carol to a friend's party. Will learning the finer points of social courtesy help him have fun at the party and maybe get a second date? This film tries to help awkward teens overcome small interpersonal problems before they grow into real social crises-alienation, vandalism, alcoholism, crime and a lonely life as a bachelor.

Helping Johnny Remember (1956; Portafilms; 10 minutes): Kids in a limbo space are building a perfect little society out of shoeboxes and poster paint. Johnny has been banished from this world because he can't get along with the others!

This collection of short films were produced around the mid-20th century, and were an adult reaction to the burgeoning youth culture movement that, they felt, posed a very real threat to civilization! The films included are: "Are Manners Important'" (1954), which teaches manners to a young man with designs on the presidency; "Good Table Manners" (1951), which transports a boy backwards and forwards in time so he can teach himself table manners; "We Play And Share Together" (1951), which shows two girls how much more fun they'd have if they shared their toys; "Everyday Courtesy" (1948), which teaches children and adults how to be polite; "Exchanging Greetings and Introductions" (1960), which stresses how important it is to greet someone in a polite manner; "Social Courtesy" (1951), which teaches teenagers how to act in a social situation; "Helping Johnny Remember" (1956), which sees a group of kids building their own society, only to exclude a member due to his poor manners; and, finally, "By Jupiter" (1941), in which one man is allowed to relive a day in his life.

Instructional | Teenage | Documentary | Teenagers
This product is made-on-demand by the manufacturer using DVD-R recordable media. Almost all DVD players can play DVD-Rs (except for some older models made before 2000) - please consult your owner's manual for formats compatible with your player. These DVD-Rs may not play on all computers or DVD player/recorders. To address this, the manufacturer recommends viewing this product on a DVD player that does not have recording capability.