What we have here is a total lack of respect for the law! 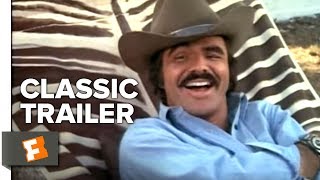 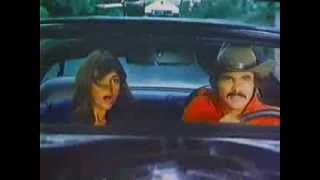 Burt Reynolds stars as the Bandit in this seminal portrayal of rough-ridin', beer-swillin', sheriff-dodgin', trouble-chasin' truckers. The Bandit's has taken on his craziest haul yet: a trailer full of Coors beer. If he can deliver the goods from Texarcana to Atlanta within forty-eight hours, he'll be $80,000 richer. Hilarious mayhem ensues, however, when the Bandit falls for a runaway bride (Sally Field). As they push toward Atlanta, the two have to evade Fields' vengeful father-in-law, Texas Sheriff Buford T. Justice (Jackie Gleason as the maniac "Smokey" of the title). The stakes get higher and the car chases more frenzied in this hysterical romp through the American highways. Charismatic performances by Reynolds and Gleason made this a huge box office draw. ITA winner. Academy Award Nominations: Best Film Editing.

This comedy cult classic from the 1970s stars Burt Reynold as the Bandit, a high rolling trucker and moonshine runner who stands to win $80,000 simply by transporting a truck-full of beer from Georgia to Texas -- providing he makes it in 28 hours. On the way he has to evade the notorious Sheriff Buford T. Justice. But when the Bandit picks up Carrie, sheriff Justice's soon-to-be daughter-in-law, the race becomes much more personal for the lawman.