Mojo (Publisher): 4 stars out of 5 -- "He's as fit as a Stradivarius as he celebrates his 80th birthday and wraps his singluar phrasing around the Irving Berlin title tune..." 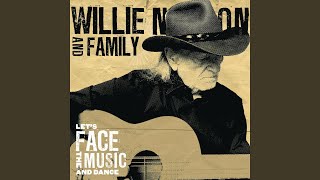 Billboard (p.43) - "He's in robust voice and picking form throughout..."
Mojo (Publisher) - p.87
4 stars out of 5 -- "He's as fit as a Stradivarius as he celebrates his 80th birthday and wraps his singluar phrasing around the Irving Berlin title tune..."

Personnel: Billy English (gut-string guitar, snare drum); Mickey Raphael (harmonica); Bobbie Nelson (piano); Jim "Moose" Brown (Hammond b-3 organ); Kevin Smith (upright bass); Paul English (snare drum); Micah Nelson (percussion).
Audio Mixer: Butch Carr.
Recording information: Pedernales Recording Studio, Austin, TX.
Photographer: Danny Clinch.
Once again repeating a pattern that's quite familiar from over the past two decades, Willie Nelson follows up his star-studded 2012 Legacy duet with Let's Face the Music and Dance, an intimate record of standards recorded with his longtime backing band, the Family. Apart from Willie's son Micah, there are no guests here -- just his sister Bobbie on piano, drummer Paul English, Mickey Raphael on harmonica, Kevin Smith on bass, Jim "Moose" Brown on organ, and Billy English batting cleanup on guitar and drum -- and the album sounds as if it were cut in the living room late one night, the bandmembers easing into songs they've always loved but never played. This may include Willie's original "Is the Better Part Over," a neglected tune from the late '80s, but the emphasis is on standards from the Great American Songbook, punctuated by a bit of Western swing and rockabilly (the latter arriving via a cover of Carl Perkins' "Matchbox"). While there's no denying Willie's voice sounds a little ragged -- scars of his 79 years are readily apparent -- it doesn't distract from the lazy, loping pleasures offered here, as the focus is not on the singing but the playing, how the Family is so familiar with their individual idiosyncrasies they sound like one seamless unit, easing from solo to solo, sometimes just enjoying their ragged, relaxed groove. So, there are no surprises on Let's Face the Music and Dance but there don't need to be: it is, as always, a pleasure to hear Willie & the Family play the music they love best. ~ Stephen Thomas Erlewine

Willie Nelson
Somewhere Over The Rainbow
$8.20
Add to Cart

57%off
Willie Nelson
For The Good Times: A Tribute To Ray Price
$5.98 on Sale
Add to Cart