Blake Shelton Based on a True Story... 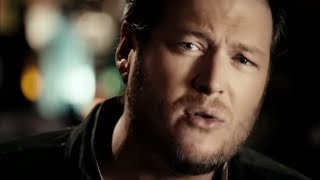 Blake Shelton - Sure Be Cool If You Did (Official Music Video) 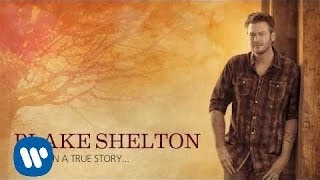 Personnel: Bryan Sutton (acoustic guitar, acoustic 12-string guitar, acoustic slide guitar); Danny Parks (acoustic guitar, banjo); Troy Lancaster, Tom Bukovac, Adam Shoenfeld (electric guitar); Russ Pahl (lap steel guitar, pedal steel guitar); Paul Franklin (pedal steel guitar); John Willis (banjo); Aubrey Haynie (fiddle); Gordon Mote (piano, Hammond b-3 organ, Wurlitzer organ); Charlie Judge (Hammond b-3 organ, synthesizer); Greg Morrow (drums, percussion); Ben Phillips (percussion); Jimmy Robbins, Chris Tompkins (programming); Rodney Clawson, Dallas Davidson, Gwen Sebastian, Pistol Annies, RaeLynn, Rhett Akins, Scott Hendricks , Wes Hightower, Perry Coleman (background vocals).
Audio Mixer: Justin Niebank.
Recording information: Cinema Sound; Ocean Way, Nashville, TN; Riverview Back Porch Studio; Sound Emporium; Villahona Resort; Warner Bros Studio B.
Photographers: Sandra Johnson; Charles Henry .
A few months before he released his seventh album, Based on a True Story..., Blake Shelton weathered a minor storm over comments he made to GAC's Backstory, where he claimed "nobody wants to listen to their grandpa's music." Shelton further explained "old farts" "don't buy records anymore...the kids do, and they don't want to buy the music that you were buying." At 36 years old, Shelton isn't exactly a kid, but he sure has his finger on the pulse of what America is all about in 2013, a perspective that informs every cut on Based on a True Story.... Not so coincidentally in terms of attitude, this is the first album Shelton has made since turning into a genuine crossover star thanks to his role on the televised competition The Voice -- Red River Blue, his last album, appeared just a month after the first season of The Voice wrapped -- and it reflects his newfound popularity via its reliance on rocking rhythms, woolly mammoth hooks, red state swagger, and pristine power ballads, all protected in a high-gloss coat of studio varnish. Some of that varnish includes a dose of heavy Auto-Tune on Blake's voice, a bit of trickery he doesn't need -- there's a reason why he's a judge on a singing competition; he has an easy, natural grace to his delivery -- but its artificially correct sound is simply another indication of the thoroughly modern Shelton: few other country albums of 2012-2013 are as unabashedly of the moment as this, celebrating all of the U.S.A. from the fame-hungry Sunset Strip to parties in the boondocks. By playing to both the high and low brow, Shelton consolidates the entire spectrum of his audience, from the country to the coasts. Both audiences buy into his increasingly macho strut, where he tosses out casual profanities, brags that he's "Still Got a Finger" (to flip you the bird, of course), and salutes his redneck brothers via the rapped "chew tobacco/chew tobacco/chew tobacco/spit" chorus of "Boys 'Round Here." That Shelton can pull off this big, swinging bravado isn't much of a surprise -- when his voice trills electronically on "Small Town Big Time" he makes it sound like a joke -- and the very sense that more is more is essential to the appeal of Based on a True Story...: every song is bigger, brighter, bolder than the next, super-sized country for a super-sized time. ~ Stephen Thomas Erlewine