They Made Me A Killer

Police hunt for an innocent man believed to be the prime suspect in a murder case. 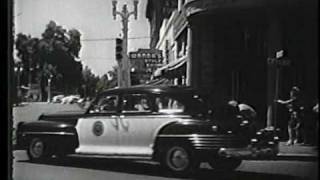 They Made Me A Killer Trailer

Haunted by the death of his kid brother, Tom Durling leaves Chicago behind for a fresh start in California. Hoping to sell his car, Tom arranges a meeting with a fast-talking woman named Betty and her boyfriend, Jack. Betty and Jack aren't really interested in buying the car, though... they just need a patsy with a fast ride to help them escape the scene of a violent bank robbery. The thieves flee the crime scene, leaving a policeman dead and Tom unconscious with a pistol in his hand. The law wastes no time pinning the murder on Tom. Unable to convince the cops that he's been framed, Tom sees his last glimmer of hope fade with the death of Steve Reynolds, the only witness to the robbery who could vouch for his innocence. Facing a sure conviction, Tom escapes police custody and has a chance run-in with Reynolds' sister, June. Tom suggests that they team up to capture the real criminals and she reluctantly agrees to help him. A lucky break puts them right in the middle of the dangerous syndicate - they'll need to think fast if they want to make it out alive.

Beginning her career in film and eventually transitioning to stage productions and television programs, Barbara Britton is perhaps best known as the "face" of Revlon during the 1950s and '60s and for her role opposite Richard Denning in the "Mr. and Mrs. North" television series.

In THEY MADE ME A KILLER, California is the destination for Tom Durling, a man escaping from the bad memories and rotten luck that haunted him during his stay in Chicago. But on arrival, Durling still can't shake his losing streak, as he becomes unwittingly embroiled in a bank robbery. Two criminals take advantage of his good nature and frame him for the crime, and Durling faces a murder rap when the police apprehend him. Praying that his luck will finally change, Durling desperately seeks out a witness to the robbery as he stares headlong at a potentially lengthy stretch in the slammer for a crime he didn't commit.

Film Noir | Crime
This product is made-on-demand by the manufacturer using DVD-R recordable media. Almost all DVD players can play DVD-Rs (except for some older models made before 2000) - please consult your owner's manual for formats compatible with your player. These DVD-Rs may not play on all computers or DVD player/recorders. To address this, the manufacturer recommends viewing this product on a DVD player that does not have recording capability.

They Made Me a Criminal / Lady Gangster
$8.70 Super Savings
Add to Cart

Crime Against Joe
$19
Add to Cart