Add to Cart
Notify Me When Available
Add to Wishlist
Format:  Vinyl LP
sku:  74JQ5
Our customers love us! 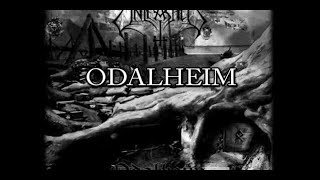 Never underestimate the desire for revenge as a motivating factor. Not unlike Dave Mustaine, whose ouster from Metallica gave rise to an improbably long career with Megadeth, most of it stacked against frankly incredible odds, Swedish headbanger Johnny Hedlund turned his ejection from Nihilist (the formative version of death metal legends Entombed) into the driving force behind Unleashed. Also like Megadeth, Unleashed now find themselves in the unexpected position of having out-recorded, if not outsold, their nemesis -- thanks largely, no doubt, to a thirst for vengeance and need to prove themselves that's helped Hedlund and company maintain a much more consistent sonic blueprint through the years, and a raging, burning ambition to boot. How else to explain the astonishing death metal fury displayed by Unleashed's 11th career full-length, Odalheim, which could arguably challenge 1991's Where No Life Dwells debut as the group's most violent creation...ever! (Odalheim also doubles as Unleashed's first concept album, its 11 songs based on the chapters in a Norse saga about the aftermath of Ragnar”k written by Hedlund.) Opening number "Fimbulwinter" storms the shores of Valhalla with devastating blastbeats worthy of black metal, and when subsequent bashers like "Gathering the Battalions," "Rise of the Maya Warriors," "By Celtic and British Shores" (which quotes liberally from Winston Churchill), and "Germania" aren't remorselessly slaughtering each other's armies, the bloody screeds of "White Christ," "The Great Battle of Odalheim," and others of their ilk keep the enemy ever on their heels. Not even the frequent acoustic guitar intros scattered across the album linger long enough to forestall the snowballing sonic apocalypse, and neither the central story line nor the wanton savagery that propels it ever tampers with Unleashed's trademarked big choruses and Hedlund's clear enunciations -- still a rarity in death metal. Rarer still are the Swedish death metal warriors of old who remain forces to be reckoned with, and thus, this latest triumph probably deserves a toast: here's to Unleashed...and here's to revenge! ~ Eduardo Rivadavia