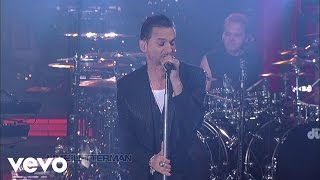 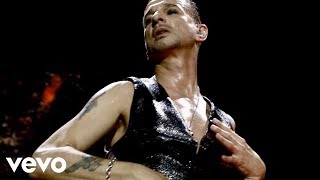 Rolling Stone - p.64
3.5 stars out of 5 -- "DELTA celebrates brooding faith and slippery solace without scrimping on Depeche's trademark black-strobe punishment."
Billboard (p.41) - "[T]he tightly wound 'Secret to the End' and techno-driven 'My Little Universe' have strident, dark hooks that stick."
Q (Magazine) - p.93
4 stars out of 5 -- "DELTA MACHINE has a constituency and an inventiveness far beyond what might be expected at this point in Depeche Mode's or any band's career."
Mojo (Publisher) - p.85
3 stars out of 5 -- "[I]ts songs [are] voluminous vehicles for a miscellany of electronic textures and Dave Gahan's clamorous, soul-in-torment vocals."

Personnel: Christoffer Berg, Kurt Uenala (programming).
Audio Mixer: Rob Kirwan.
Recording information: Jungle City, New York, NY; Sound Design, Santa Barbara, CA.
Photographer: Anton Corbijn.
The strange thing about Depeche Mode is that even when they possess the wisdom that comes from being put through the wringer -- both as a band about to break up and lead singer David Gahan's struggles with addiction -- they are still quite good at making self-destruction sound seductive. Everybody knows that was the devil talking in "Personal Jesus," while "Strangelove," "Behind the Wheel," and so many other prime Depeche tunes sink in a sea of sin or drown in damnation, and the band sound like they're in the throes of ecstasy while doing it. Delta Machine, the band's 13th album, feeds off this negative energy and winds like a snake the whole time, slithering through a well-written (ten songs from Martin Gore with three coming from Gahan) and lusciously recorded set of serpentine siren songs (behind the boards there's Playing the Angel and Sounds of the Universe producer Ben Hillier, plus longtime asset Flood providing the mix). "Heaven" is a simmering ballad, combining the sexy and lusty attitude of "Personal Jesus" with the reserve of their 2005 hit "Precious." The great "Alone" seems the quintessential post-millennial Depeche track with music that glitches, groans, and somehow grabs the listener, while the lyrics give away the big conundrum "I couldn't tell if you were blessed or cursed," which is the sexiest trait ever according to the Mode. With some blues-rock guitar and the darkest synthetic landscape underneath, key track "Slow" is a lusty wish to delay la petit mort, while "Should Be Higher" suggests "When the shame and the guilt are removed and the truth will appear" as if the Rocky Horror Picture Show's "Don't Dream It, Be It" traded its camp for carnal desire. "Should Be Higher" is also one of the rare moments where the beat is pushed, so those who still expect the dancefloor side of the group will be disappointed with this slower set. Those who don't buy into the dark eroticism that drives the album will be disappointed as well, but don't mistake "dour" for "down for it" when it comes dressed-in-leather pants, because the simmering and dark Delta Machine is certainly the latter. ~ David Jeffries

Depeche Mode
Songs of Faith And Devotion
$15.70
Add to Cart

62%off
Robert Palmer
The Essential Selection
$7.50
Add to Cart