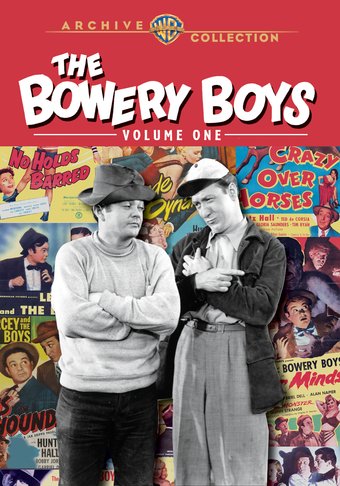 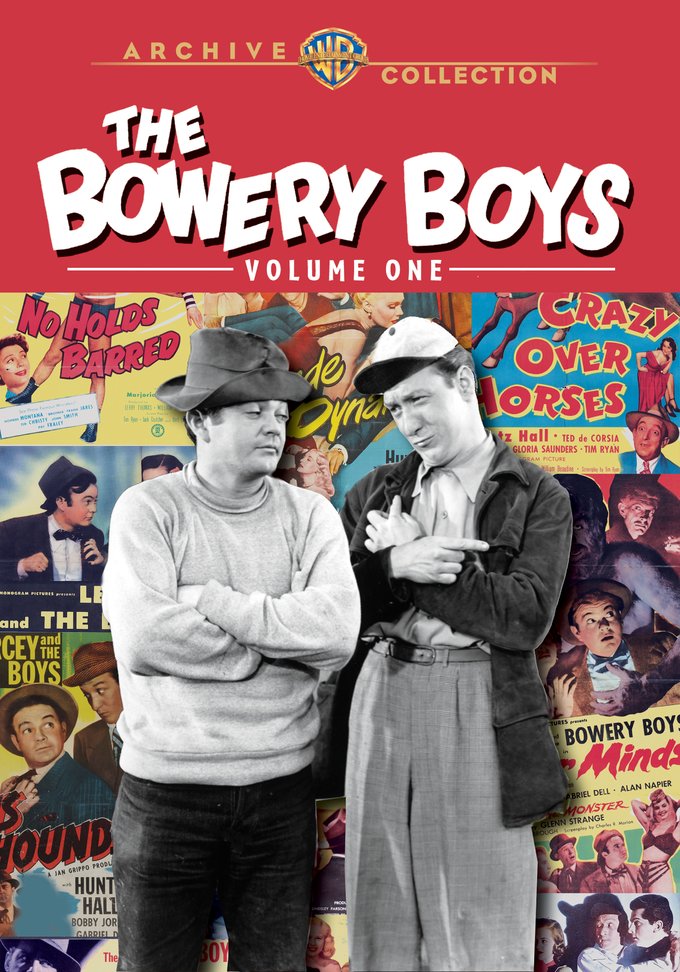 From Dead Ends to the East Side and finally landing in Louie's Sweet Shop in the heart of the Bowery (3rd and Canal, natch!), there was no stopping these Boys! When understudy Leo Gorcey joined the ensemble of teen thespians on stage for the Broadway hit "Dead End", Hollywood soon followed with William Wyler taking the troupe in toto for 1937's film version. Personifying the grit and heart of the kid gangs sprouting up in city slums, these little wise guys quickly stole the nation's heart. Ably anchored by the central pair of Huntz Hall and Leo Gorcey, the kids moved from "preachment" and crime pictures to straight up comedy as The Bowery Boys - and the rest is history as the boys capered through scores of pictures for over two decades!

The Bowery Boys were a series of young street urchin characters who appeared together in a series of 48 American movies from 1937 through 1958. Installments followed the boys' misadventures in the inner city; over time, the films evolved from earnest crime drama (DEAD END, 1937) to pure comedy, and the group itself went through several different incarnations including "The Dead End Kids," "The Little Tough Guys," "The East Side Kids," and ultimately, "The Bowery Boys." Twelve BOWERY features comprise this box set, including FIGHTING FOOLS (1949), HOLD THAT BABY! (1949), LUCKY LOSERS (1950) and BLUES BUSTERS (1950).
This product is made-on-demand by the manufacturer using DVD-R recordable media. Almost all DVD players can play DVD-Rs (except for some older models made before 2000) - please consult your owner's manual for formats compatible with your player. These DVD-Rs may not play on all computers or DVD player/recorders. To address this, the manufacturer recommends viewing this product on a DVD player that does not have recording capability.

Customer Rating:
Based on 28 ratings.


A LARGE CHUNK OF MY CHILDHOOD WAS SPENT WATCHING THE BOWERY BOYS COMEDIES! SLIP,SACH, ******,CHUCK AND BUTCH ALWAYS LOUNGED AT LOUIES SWEET SHOP LOCATED AT CANAL AND 3RD STREET(THOSE 2 STREETS DONT CONNECT-I KNOW, IM A NATIVE NEW YORKER)! ANYWAY, FOR A YOUNG KID WATCHING THEIR FILMS WAS A SHEER DELIGHT AND I LOOK FORWARD TO HAVING SACH SMACK AROUND IN EVERY STORY! ACTUALLY, LEO GORCEY AND HUNTZ HALL WERE GREAT FRIENDS IN REAL LIFE AND THATS WHY THE SERIES WAS SO SUCCESSFUL FOR OVER TEN YEARS! THIS COLLECTION WILL MAKE U LAUGH! I GUARANTEE IT!