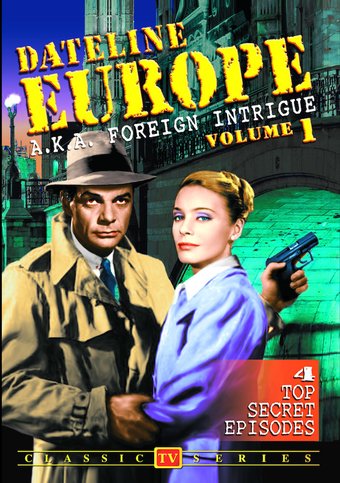 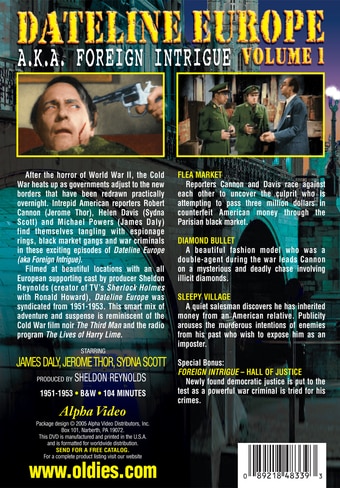 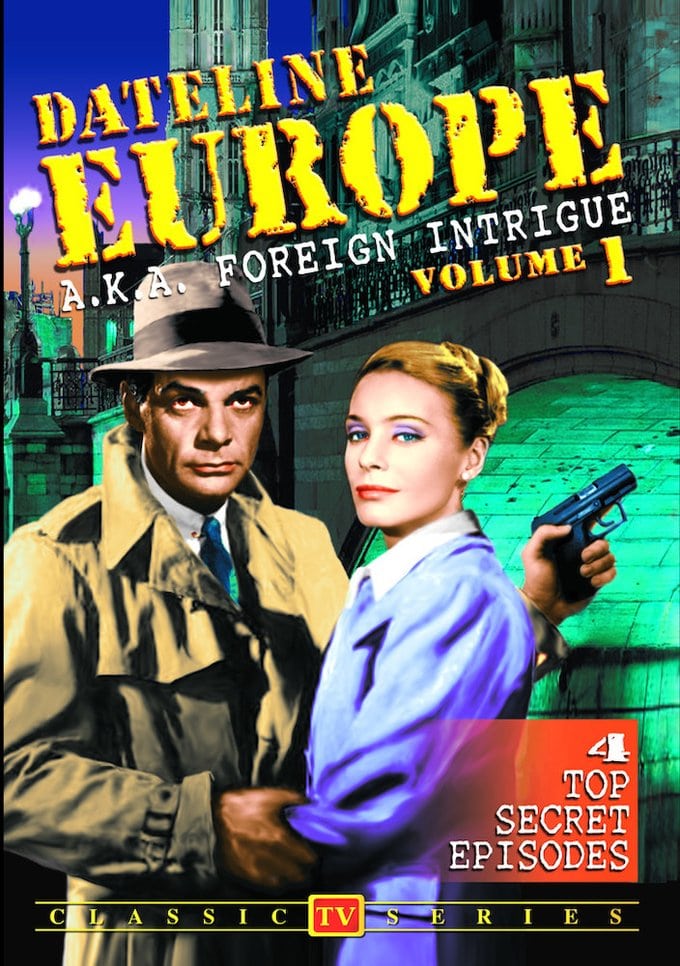 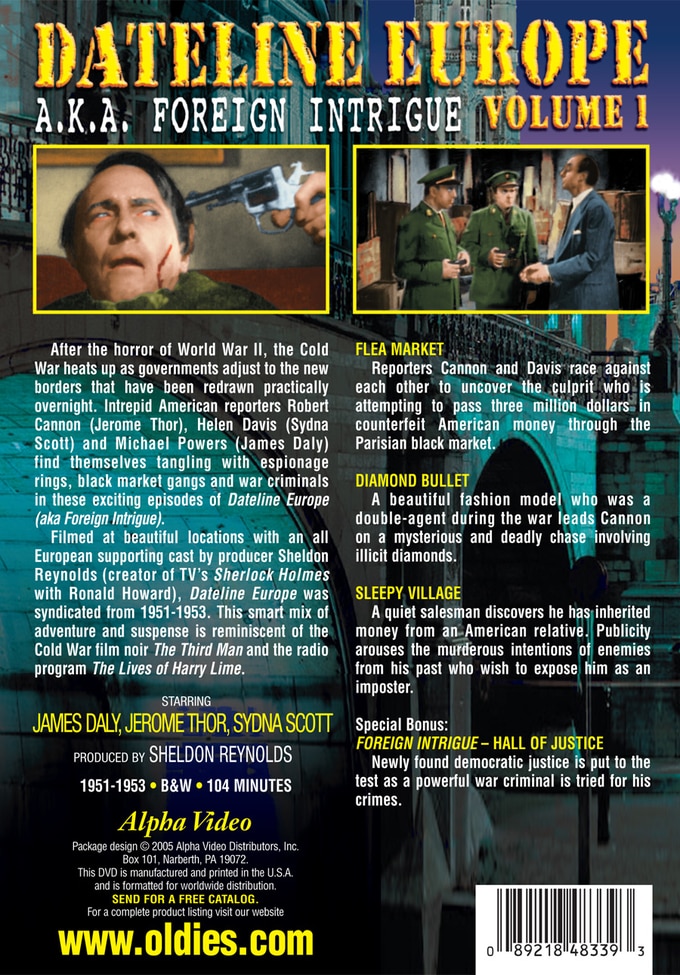 After the horror of World War II, the Cold War heats up as governments adjust to the new borders that have been redrawn practically overnight. Intrepid American reporters Robert Cannon (Jerome Thor), Helen Davis (Sydna Scott) and Michael Powers (James Daly) find themselves tangling with espionage rings, black market gangs and war criminals in these exciting episodes of "Dateline Europe" (aka "Foreign Intrigue").

Filmed at beautiful locations with an all European supporting cast by producer Sheldon Reynolds (creator of TV's "Sherlock Holmes" with Ronald Howard), "Dateline Europe" was syndicated from 1951-1953. This smart mix of adventure and suspense is reminiscent of the Cold War film noir The Third Man and the radio program "The Lives of Harry Lime."

Flea Market: Reporters Cannon and Davis race against each other to uncover the culprit who is attempting to pass three million dollars in counterfeit American money through the Parisian black market.

Diamond Bullet: A beautiful fashion model who was a double-agent during the war leads Cannon on a mysterious and deadly chase involving illicit diamonds.

Sleepy Village: A quiet salesman discovers he has inherited money from an American relative. Publicity arouses the murderous intentions of enemies from his past who wish to expose him as an imposter.

Special Bonus - Foreign Intrigue - Hall Of Justice: Newly found democratic justice is put to the test as a powerful war criminal is tried for his crimes.

Set in various European countries, this post-World War II TV drama draws on much of the unease and uncertainty felt across the continent during this period. Three reporters--Robert Cannon (Jerome Thor), Helen Davis (Sydna Scott), and Michael Powers (James Daly)--follow some illicit activities over the four episodes included here. The group discovers counterfeiters in "The Flea Market," a beautiful double agent in "Diamond Bullet," a troubled heir in "Sleepy Village," and a war criminal in "Hall of Justice." With the Cold War in full swing, rampant paranoia runs throughout.

Series | Classic | Spy | Classic Television | Europe | Cold War
This product is made-on-demand by the manufacturer using DVD-R recordable media. Almost all DVD players can play DVD-Rs (except for some older models made before 2000) - please consult your owner's manual for formats compatible with your player. These DVD-Rs may not play on all computers or DVD player/recorders. To address this, the manufacturer recommends viewing this product on a DVD player that does not have recording capability.


Early 1950s television saw a number of Cold War and foreign intrigue series like "Dangerous Assignment," "Passport to Danger," "Secret File, USA" and this series, from producer Sheldon Reynolds ("Sherlock Holmes" with Ronald Howard). I purchased this as a "blind buy" and immediately was hooked. Like "Secret File, USA," "Dateline Europe" makes excellent use of English-speaking European casts (mostly Swedish and French) and location filming, and the stories are well handled. The first three episodes in Volume 1 feature Jerome Thor and/or his real-life wife Sydna Scott, while the last episode features the better known James Daly (shown on the front cover of the DVD).

The downside to this release is the relatively poor condition of the episodes, especially the Thor/Scott episodes. They're watchable, to be sure, but are not restored and those who are accustomed to pristine prints found on most modern day DVDs will be disappointed. But, remember, "Dateline Europe" remains a difficult find on home video, so you're really getting the opportunity to see episodes of a series that's not been seen in decades at a very modest price.

As is the case with many of its "Classic TV Series," one has to give Alpha Video much credit for finding these old gems and releasing them. Alpha remains the best company for releasing these vintage television shows of the Cold War era.