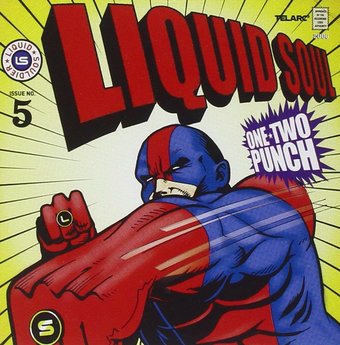 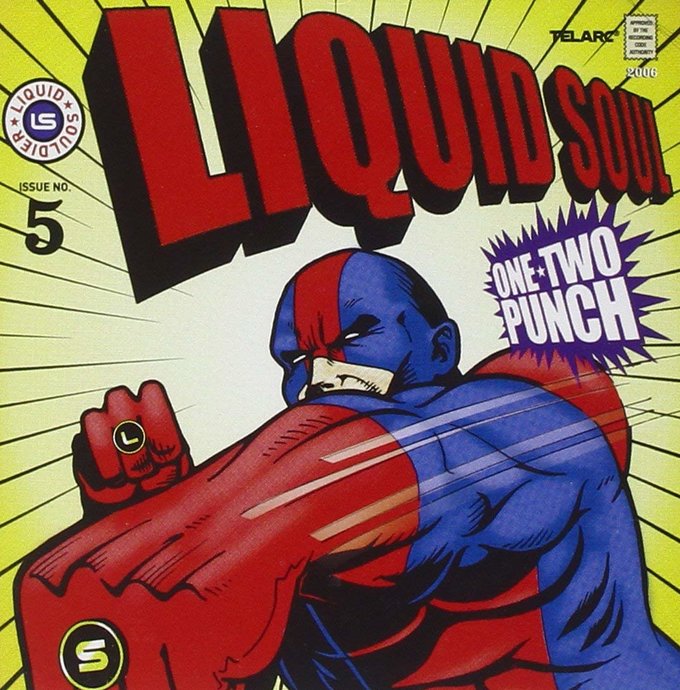 Liquid Soul (Nicola Capobianco): Mars Williams.
Personnel: Tommy Klein, Vernon Reid (guitar); Mars Williams (woodwinds, saxophone, keyboards, electronics, loops); Hugh Ragin (trumpet); Andrew Baker (trombone); Chris "Hambone" Cameron (keyboards); David Suycott, Matt Walker (drums); Leddie Garcia (percussion); Van Christie (programming); Jim Dinou (electronics); DJ Logic (turntables).
Additional personnel: DJ Logic, Jojo Hermann, Matt Walker .
Audio Mixers: Mars Williams; Van Christie.
Recording information: Pulse Black Studios, Chicago, IL.
Illustrator: Gabriel Chu Usadel.
It's been four long years since Mars Williams and Liquid Soul have issued another chapter in their ongoing dissemination of musical genres under the jazz banner. One-Two Punch, the band's debut for the Telarc label, is a lot rougher, rawer, and more upfront raucous than anything they've done to date. While the slicker grooves of uptown soul, funk, and hip-hop are still present, but there are African and Middle Eastern modes, drones, and polyrhythms in a mix saturated with DJs (DJ Logic is the house turntablist in this band, but he's one of a number), killer guitars, and of course that four-piece horn section that includes Williams, trumpeters Hugh Ragin and Doug Corcoran, and trombonist Andy Baker. Phil Ajjarapu's bass is the bedrock with Tony Taylor's kit work walloping the groove. The opener, "Baghdad Caf‚," begins with a chorus of sampled voices chanting, coming out of the ether as breakbeats come sailing up from underneath like machine guns. Tommy Klein's guitars start a rolling metallic vamp before the horns collide in the center. Voices enter and leave like ghosts from another age. They rasp, soar, wail, and worship. The horns plot the course of this modal groove that is equal parts Egypt and Nigeria. Williams' musette plays snake charmer above the fray as a wash of keyboards litters the middle of the mix with dense splashes of sound. The house groove on "Attaboy" is offset by the MC'ed refrain (by MC B) while Ajjarapu's bassline is a syncopated funk riff derived from the M/A/R/R/S classic "Pump Up the Volume." The horn section comes right out of the JB's fakebook. The slippery nu-school, hip-hop-driven urban soul of "Body and Mind" is led by Boy Ellroy Arredondo. The horns float and stab as the bassline and a killer vibes solo add jazzed-up touches. When Williams blows, his tenor solo is pure soul-jazz from the day melded to Gato Barbieri's rolling legato that slip out the front door before a series of breaks usher in the last verse of the rap. Three tracks in and the set is just getting on its feet. Other standouts -- on a set almost seamlessly perfect -- include the truckload of dynamite Afro funk of "Sex God," where bebop, hard bop, and Ornette Coleman's harmolodics meet Fela, Was (Not Was) meets the Time in the stomp and romp of "Stop." The soul-jazz blues meet uptown club culture in "Peanut Head." The cool, futuristic quotational reference from Dizzy Gillespie's "Bebop" comes wafting out of the phones before Klein's metallic guitars displace it and dislocate history, but not before the theme asserts itself and then melts down in the hard bop-inspired funk of "Nothing But Net." Another interlude (there are four that function almost like skits on hip-hop records), "Liquid Angels" borrows (literally) Albert and Donald Ayler's horn lines to open an eerie door to the gritty Afro-Cuban funk of "Boxer's Fracture." The album comes to a close much as it came in, with big riffing guitars blazing an intro for the knotty horn lines on "Kong." It's a mother, all crazy overdriven atmospherics coming up with one big whomp to take it all to the bridge and out the stage door with a killer, sick-ass guitar break from guest Vernon Reid. Simply put, this One-Two Punch is the most adventurous studio outing in Liquid Soul's career, and their most musically adventurous since their self-titled debut a decade ago . ~ Thom Jurek

40%off
Nnenna Freelon
Blueprint of a Lady: Sketches of Billie Holiday (CD)
$5.98 on Sale
Add to Cart