A paranoid madman inexplicably dies and leaves behind a note falsely accusing his wife of poisoning him. 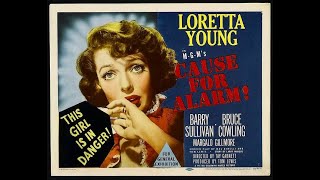 Madness lurks in the upstairs bedroom of homemaker Ellen Brown's seemingly calm, well-manicured suburban home. There, her husband George descends into a dark world of dementia brought on by a heart condition. Ellen's life becomes a living hell as she tries to keep their marriage alive, accommodating his every need. Convinced that his pretty wife and his doctor are plotting to kill him, George concocts a list of evidence along with a letter for the district attorney disclosing his suspicions. Unknowingly, she mails the incriminating letter. During a fit of rage, George pulls a gun, but is killed in the ensuing struggle. When Ellen realizes the content of the letter she has mailed, she must find a way to retrieve it or face a murder charge.

Cause For Alarm!, dark and sinister in its theme, paints a powerful portrait of paranoia and fear in the unusually bright and cheerful setting of middle-class America. Tay Garnett, who also directed The Postman Always Rings Twice in 1946, delivers a taut suspenseful tale that is a dramatic tour-de-force for actress Loretta Young (in a role originally considered for Judy Garland). Although a successful box-office film for MGM at the time, Cause For Alarm! was one of Young's last movies before she launched a successful television career. Young and director Garnett would reunite for her series, "A Letter For Loretta," which earned her three Emmy awards. Look for a cameo performance by Our Gang member Carl "Alfalfa" Switzer.

A former US serviceman recovering from illness (Barry Sullivan) forms an unfounded suspicion that his wife (Loretta Young) is having an affair and decides to frame her. After planting evidence that she and her lover were planning on poisoning him, he dies of other causes, leaving her in a predicament that appears to implicate her in foul play from any angle. Taut pacing, fine performances, and a great plot make this a classic thriller.

Vintage | Injustice | Betrayal | Theatrical Release
This product is made-on-demand by the manufacturer using DVD-R recordable media. Almost all DVD players can play DVD-Rs (except for some older models made before 2000) - please consult your owner's manual for formats compatible with your player. These DVD-Rs may not play on all computers or DVD player/recorders. To address this, the manufacturer recommends viewing this product on a DVD player that does not have recording capability.

Customer Rating:
Based on 2139 ratings.


Very well written and played movie. This movie literally almost had me forwarding ahead throught he suspense to see the ending quicker. I really was on the edge of my seat,although at one point I was calling Loretta Young an idiot. Great movie for all

88%off
End Times Collection (The Apocalypse / 2012: Doomsday /... TOP 25 Bestselling DVD
$1.98 on Sale
Add to Cart
(10,000+)
Film Collectors & Archivists: Alpha Video is actively looking for rare and unusual pre-1943 motion pictures, in good condition, from Monogram, PRC, Tiffany, Chesterfield, and other independent studios for release on DVD. We are also interested in TV shows from the early 1950s. Share your passion for films with a large audience. Let us know what you have.
How to Order
Shipping Rates & Options
International Shipping
Return Policy
Request a FREE Catalog
Order Items by Catalog
View Catalogs Online
Safe Shopping Guarantee
Buy a Gift Certificate
About OLDIES.com
Customer Reviews
Contact Info
Privacy Policy
Send Feedback
Login
Forgot Password?
Sign Out
Email Subscriptions
Redeem Gift Certificate
To place an order or for customer service, call toll-free 1-800-336-4627 or outside the United States, call 1-610-649-7565
Open Monday-Friday: 9am-10pm, Weekends: 11am-7pm (Eastern Time)
Portions of this page © 2020 TiVo Corporation. For personal non-commercial use only. All rights reserved.
All copyrights, trademarks, and logos are owned by their respective owners. Rotten Tomatoes content and Certified Fresh™ Logo is Copyright © Fandango. All rights reserved.
© 2020 OLDIES.com and its affiliates and partner companies. All rights reserved.