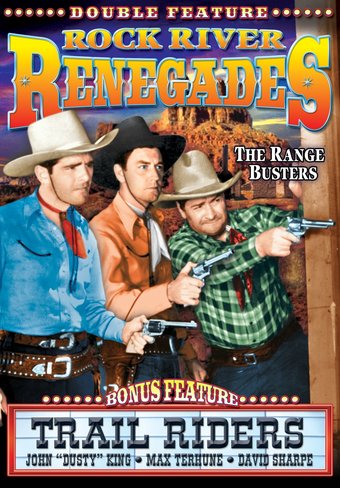 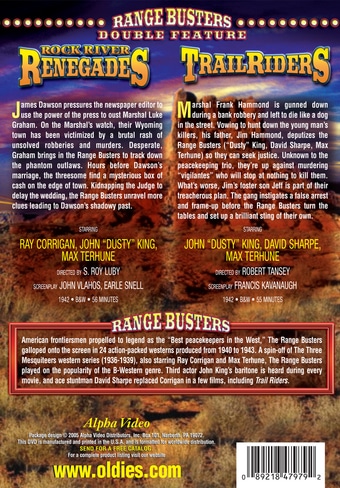 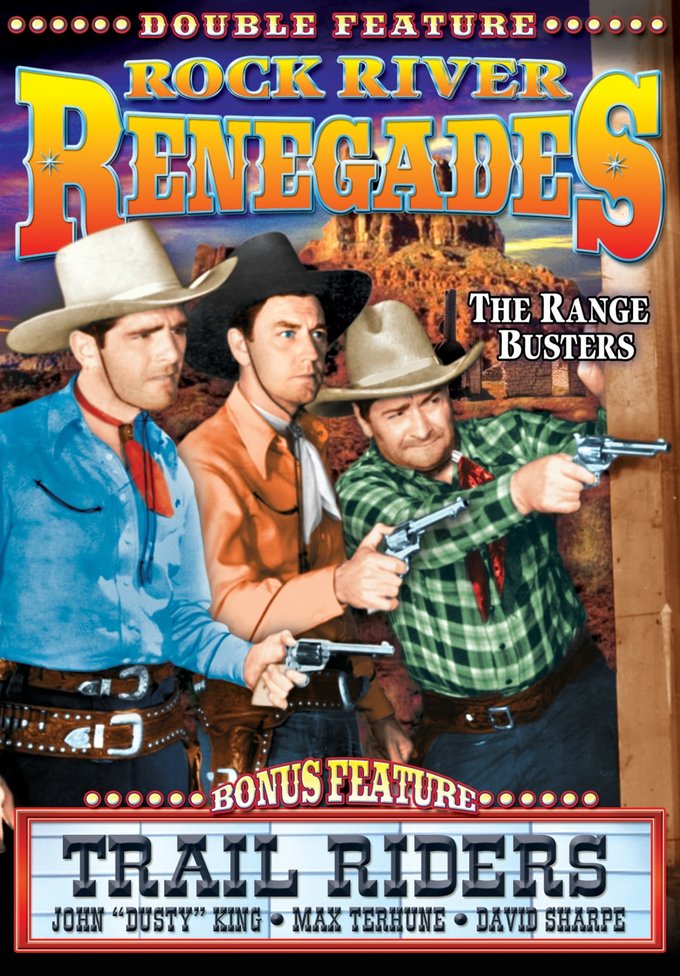 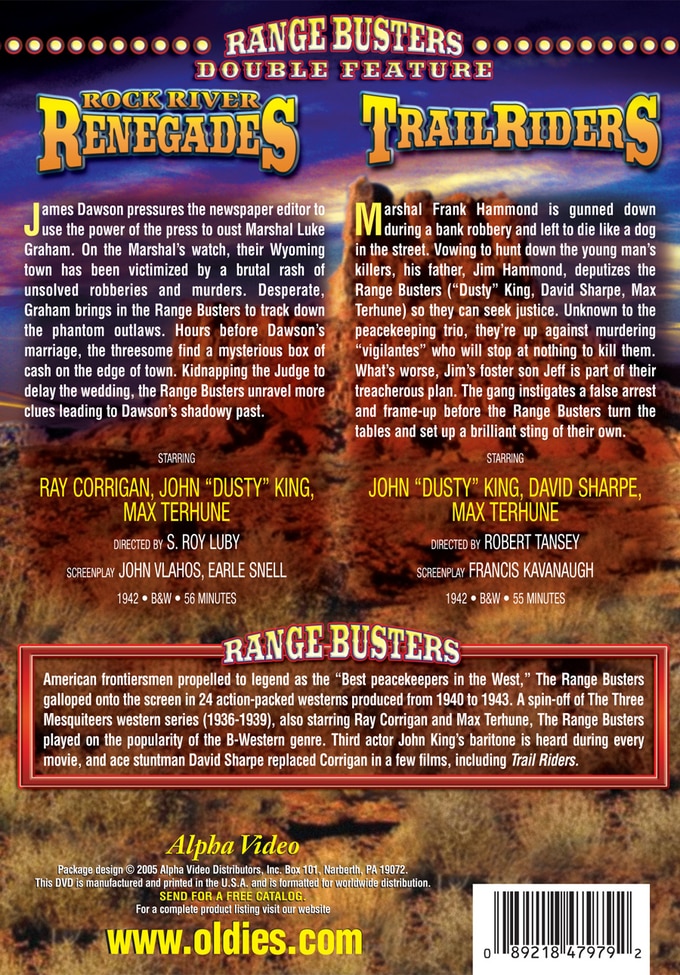 American frontiersmen propelled to legend as the "best peacekeepers in the West," The Range Busters galloped onto the screen in 24 action-packed westerns produced from 1940 to 1943. A spin-off of The Three Mesquiteers western series (1936-1939), also starring Ray Corrigan and Max Terhune, The Range Busters played on the popularity of the B-Western genre. Third actor John King's baritone is heard during every movie, and ace stuntman David Sharpe replaced Corrigan in a few films, including Trail Riders.

Rock River Renegades (1942; B&W 56 Minutes): James Dawson pressures the newspaper editor to use the power of the press to oust Marshal Luke Graham. On the Marshal's watch, their Wyoming town has been victimized by a brutal rash of unsolved robberies and murders. Desperate, Graham brings in the Range Busters to track down the phantom outlaws. Hours before Dawson's marriage, the threesome find a mysterious box of cash on the edge of town. Kidnapping the Judge to delay the wedding, the Range Busters unravel more clues leading to Dawson's shadowy past. Starring Ray Corrigan, John "Dusty" King, Max Terhune. Directed By S. Roy Luby.

Trail Riders (1942; B&W 55 Minutes): Marshal Frank Hammond is gunned down during a bank robbery and left to die like a dog in the street. Vowing to hunt down the young man's killers, his father, Jim Hammond, deputizes the Range Busters ("Dusty" King, David Sharpe, Max Terhune) so they can seek justice. Unknown to the peacekeeping trio, they're up against murdering "vigilantes" who will stop at nothing to kill them. What's worse, Jim's foster son Jeff is part of their treacherous plan. The gang instigates a false arrest and frame-up before the Range Busters turn the tables and set up a brilliant sting of their own. Starring John "Dusty" King, David Sharpe, Max Terhune. Directed By Robert Tansey.

This double feature offers two films made in 1942. Part of the RANGE BUSTERS series, which produced an incredible twenty-four movies in just three years, both of these westerns follow frontiersmen as they try to keep the peace in the Old West. The first film, ROCK RIVER RENEGADES, finds a Marshal under pressure to quit after a rash of crimes in his town. But he suspects that the crime wave has been deliberately engineered to oust him, and calls upon the Range Busters to help him out. The second film, TRAIL RIDERS, finds the Range Busters called in to aid a father looking to avenge his murdered son, but they have to use all their cunning to bring the miscreants who performed the deed to justice.

1940s | Old West
This product is made-on-demand by the manufacturer using DVD-R recordable media. Almost all DVD players can play DVD-Rs (except for some older models made before 2000) - please consult your owner's manual for formats compatible with your player. These DVD-Rs may not play on all computers or DVD player/recorders. To address this, the manufacturer recommends viewing this product on a DVD player that does not have recording capability.