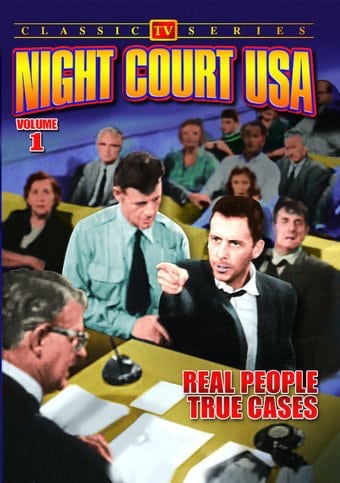 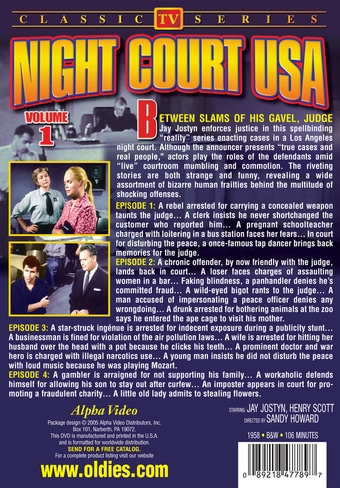 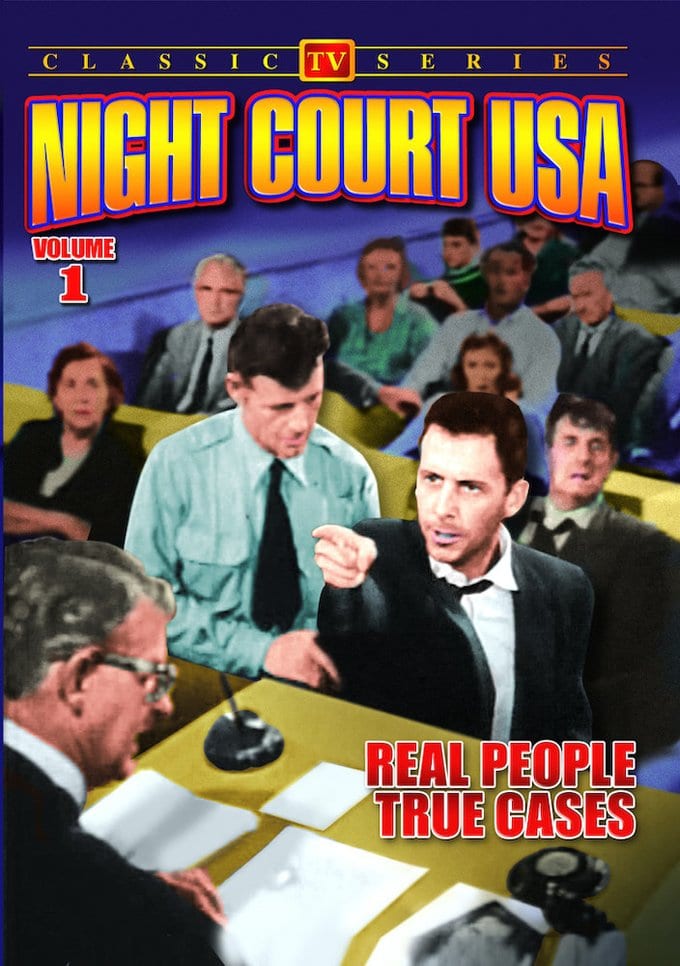 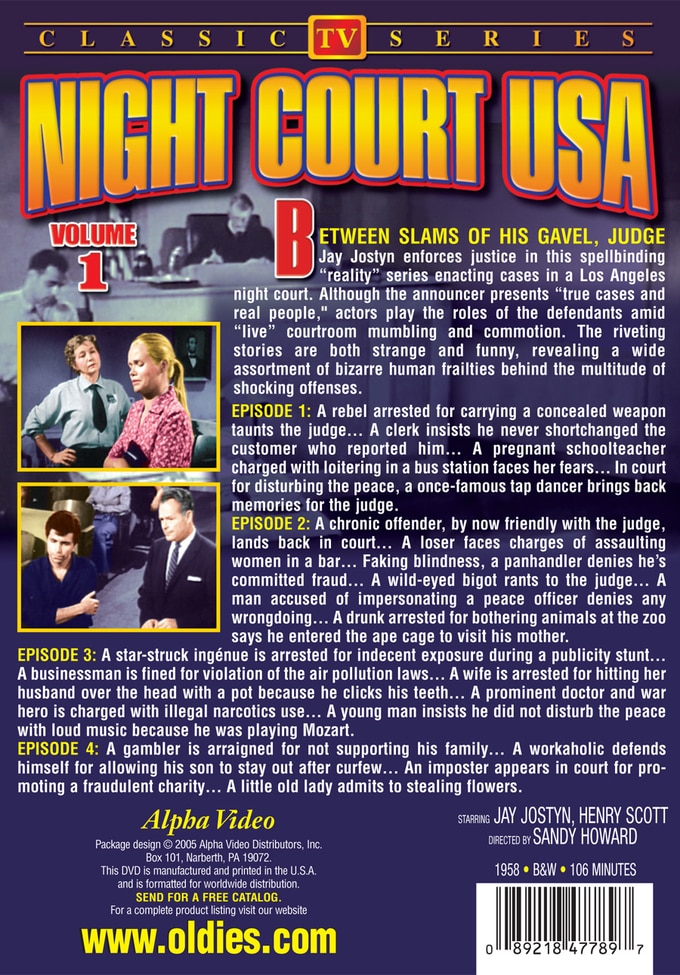 Episode 1: A rebel arrested for carrying a concealed weapon taunts the judge... A clerk insists he never shortchanged the customer who reported him... A pregnant schoolteacher charged with loitering in a bus station faces her fears... In court for disturbing the peace, a once-famous tap dancer brings back memories for the judge.

Episode 2: A chronic offender, by now friendly with the judge, lands back in court... A loser faces charges of assaulting women in a bar... Faking blindness, a panhandler denies he's committed fraud... A wild-eyed bigot rants to the judge... A man accused of impersonating a peace officer denies any wrongdoing... A drunk arrested for bothering animals at the zoo says he entered the ape cage to visit his mother.

Episode 3: A star-struck ingenue is arrested for indecent exposure during a publicity stunt... A businessman is fined for violation of the air pollution laws... A wife is arrested for hitting her husband over the head with a pot because he clicks his teeth... A prominent doctor and war hero is charged with illegal narcotics use... A young man insists he did not disturb the peace with loud music because he was playing Mozart.

Episode 4: A gambler is arraigned for not supporting his family... A workaholic defends himself for allowing his son to stay out after curfew... An imposter appears in court for promoting a fraudulent charity... A little old lady admits to stealing flowers.

Four episodes from the 1950s TV drama NIGHT COURT are included on this collection. In an early example of reality-based television, Judge Jay Jostyn presides over some real cases, although the participants are a mixture of actors, who play the defendants, and real people, whose cases are fought in front of the cameras. The cases range from a man arrested for indecent exposure to an old lady accused of stealing flowers, making this a fascinating insight into the daily life of a judge.


This show is really addictive. I had never heard of it but luckily I'm prone to snagging things out of curiosity (if the price is right, which is one thing I love about oldies.com!), and this one delivered. It's like the People's Court, but with reinactments of cases... some of which get pretty bizarre. Once in a while you can spot a familiar face, such as Geoffrey Lewis as an extra in the audience, or former Miss Yugoslavia Tania Velia, the "Yugoslavian Bombshell" who was supposed to be the "next big thing" when she made Fiend of Dope Island... but then she dropped off the planet, apparently.

The defendants in these cases are usually oddballs and crackpots and weirdoes, from ranting racists, juvenile delinquents, crazy old ladies, drunks, a guy who uses a switchblade to open dog food cans, people who are a little TOO enthusiastic about classical music, and other goofs portrayed by some of the hammiest actors they could get to work for scale.

These are must-sees and I hope more volumes will be forthcoming.


How do I begin to describe this series? At times it reminds me of ?The People?s Court,? but at other times, it doesn?t. It?s based on real court cases, but it?s presented by uncredited actors in a simple, one-set courtroom. I noticed, what looked to be, a young Geoffrey Lewis as a smirking courtroom spectator in one of the episodes on Volume 1. It?s all done very seriously, but there are some unintentional laughs. Those familiar with the Harry Anderson comedy series ?Night Court? will probably enjoy ?Night Court, USA? as Jay Jostyn presides over the various cases. Things move at a quick clip during this show that was made for a half-hour format and Jostyn usually hears and adjudicates five or so cases per show. The visual presentation of ?Night Court? is about average for Alpha?s ?Classic TV Series? line, i.e., it?s certainly not exceptional, but it is very watchable despite the occasional missing frame or two.

?Night Court, USA? is not a show for all tastes, but it is fascinating to watch and certainly set the precedent for all of the various TV court room ?reality? shows that came afterwards and continue today.