Turbulent Adventure in the Great West! 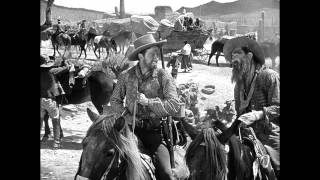 Phoebe Titus (Academy Award nominee Jean Arthur, 1943, Best Actress, The More the Merrier) is a strong, independent woman determined to make good with her freighting company in Tucson, Arizona. When she meets Peter Muncie (Academy Award winner William Holden, 1953, Best Actor, Stalag 17), however, she starts thinking about her future. But Peter decides to run out to California, and Phoebe is left alone to fend off Native Americans and two deceiving competitors (Warren William, Gold Diggers of 1933, and Porter Hall, Double Indemnity) for her business and ranch. When Peter returns, will he be enough to save Phoebe? Newly remastered.

Arthur has the right spirit for a woman struggling to settle in the lawless frontier of 1860s Arizona. She dallies with Holden, but then gets down to business despite Indian attack and shady dealings. Academy Award Nominations: Best (Black-and-White) Interior Decoration, Best Original Score.

In 1860, Tuscon, Arizona was a hinterland of rough terrain and rougher tribal warfare.
Phoebe Titus, the first female pioneer settling in the area, has the entrepreneurial fervor to develop the land. She successfully starts a railroad route from Tuscon to Fort Yuma. Aside from business, Phoebe also finds time for pleasure -- in the form of a romance with Muncie, a wandering cowboy. Then Muncie leaves for California, while Phoebe focuses on her bottom line.
Her competitors, however, are not content to let Phoebe drive them out of town. They set out to destroy her growing livelihood: they arrange the theft of her nest egg and bribe Indians to terrorize her wagon trains.
On his way back east, Muncie agrees to help Phoebe fight her adversaries on their own cutthroat terms.