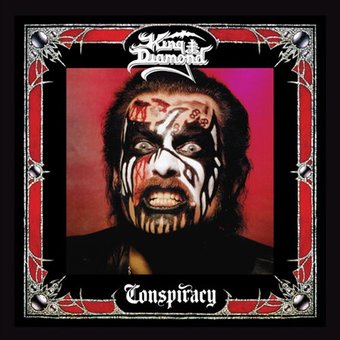 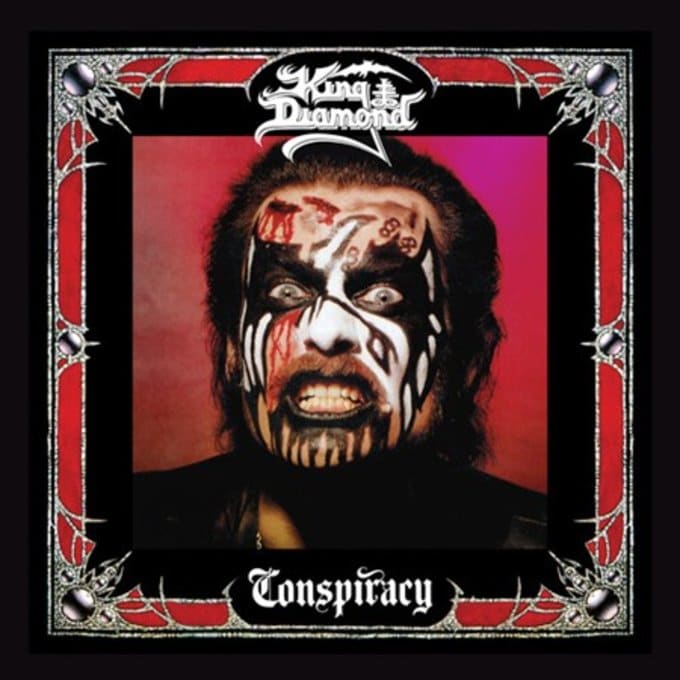 King Diamond: King Diamond (vocals); Andy La Rocque, Pete Blakk (guitar); Hal Patino (bass); Mikkey Dee (drums).
Additional personnel: Roberto Falcao (keyboards).
Producers: Roberto Falcao, King Diamond, Andy LaRocque.
Recorded at Rumbo Recorders, Canoga Park, California. Includes liner notes by Don Kaye.
Digitally remastered by Chris Gehringer (The Hit Factory, New York, New York).
The old performers' adage about not overstaying one's welcome proved itself timeless and infinitely applicable when King Diamond decided to follow a pair of stunningly successful musical horror stories -- 1987's Abigail and 1988's "Them" -- with a third, decidedly flawed episode, 1989's Conspiracy. Actually, the King's biggest mistake may have been attempting to pick up the "Them" story line again (18 years after the previous album's chronological conclusion) instead of concocting a fresh one from scratch, thus limiting Conspiracy's character development options somewhat and inviting inevitable comparisons to its clearly superior predecessor. Not that these issues were glaringly evident at Conspiracy's promising outset, following the carnival-esque vignette and epic, eight-minute variety of opener "At the Graves" with an instantly striking first single in "Sleepless Nights." But holes in the overall fabric begin to appear as soon as the ensuing "Lies" tries to chomp deeper into the meat of Conspiracy's story, which, in summary, sees the King Diamond character's questionable sanity exploited by his own mother and shrink -- who are now wed and keen on swindling him out of his inherited house, still haunted by the spirits of both Grandma and "Them"! Key, plot-advancing songs such as "The Wedding Dream," "'Amon' Belongs to 'Them,'" and "Victimized" are repeatedly encumbered by unnecessarily involved arrangements, their thematic flow lost in maze-like musical corners, so that, by the time you arrive at the climatic "Cremation," it's Andy LaRocque's distinctive needlework guitar that stands out in your memory -- not the fact that King's character is being burned alive! Clearly, Conspiracy's disappointing end-result must be blamed upon its overwrought music, which overwhelms the words instead of supporting them. After all, this chapter's story line is really no more preposterous than the first! Still, for all its narrative flaws and inconsistent songwriting, some King Diamond fans insist on defending Conspiracy exactly because it isn't as explicitly spelled out as prior works, therefore leaving some of the work for their own imaginations. ~ Eduardo Rivadavia

King Diamond
Songs for the Dead Live
$35.60
Add to Cart

Hot
Metallica
Master Of Puppets
$24.95 on Sale
Add to Cart