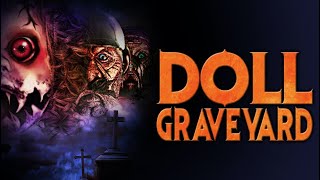 In a house shrouded in secrets, one boy discovers a 100-year-old legacy buried in his backyard. Soon after his discovery, the soul of a dead girl starts to possess him and resurrect a small posse of killer dolls.

B-movie schlockmeister and former Full Moon impresario Charles Band presents his second directorial effort under the Wizard Entertainment moniker with the low-budget horror flick DOLL GRAVEYARD. The bloody gorefest opens in 1905 as a lonely 12-year-old, Sophia (Hannah Marks), dies at the hands of her abusive father (Ken Lyle) and is buried in the backyard along with her four sinister-looking dolls. One hundred years later, Sophia's vengeful ghost returns to the house to protect the new owner's equally lonely son, Guy (Jared Kusnitz), from the taunts of his older sister's jock friends by possessing the dolls' bodies and unleashing a campy orgy of violence. Bolstered by surprisingly effective puppet-oriented special effects, DOLL GRAVEYARD is a worthy addition to the Band oeuvre.