Your flesh will crawl right off your bones.

2.3K ratings
Currently Out of Stock: We'll get more as soon as possible
Notify Me When Available
Add to Wishlist
Format:  DVD
item number:  FUL 295D
Also released as:
Creepozoids for $10.70
91% recommend us! 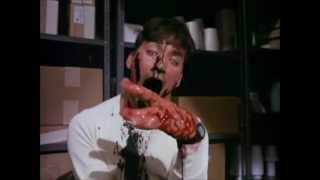 World War III has begun. To avoid their own destruction, a band of desperate deserters has fled into the desert... but when they stumble across an underground lab, they discover a horror even greater than the war itself. These survivors must now battle the Creepozoids in this post-apocalyptic fright fest.

A nuclear war has left much of the world destroyed. To avoid the deadly poisons filling the air, five survivors who have deserted the army hide out in a seemingly empty science research center. Once inside, however, the group quickly realizes they have company--a bloodthirsty monster that starts murdering them one by one. Will the remaining humans be able to destroy the creature before it wipes them all off the face of the Earth'

A mysterious substance in a subterranean lab mutates a man into a revolting cannibal insect. When a rock slide seals the lab's entrance the others are trapped with the hungry mutant.