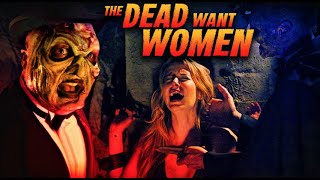 The Roaring Twenties end in a SCREAM when the first talking movie debuts. The world's biggest female silent movie star, Rose Pettigrew, goes on a killing spree when she loses her studio contract, murdering her friends and co-stars - Tubby Fitzgerald, the comedian, Erik Burke, the horror icon and Sonny Barnes (ERIC ROBERTS), the cowboy - before taking her own life. Rose's mansion has stood empty for decades, but when two realtors Reese (JESSICA MORRIS) and Danni (ARIANA MADIX) finally buy the house to remodel and sell it, they discover that there are more than skeletons in the closets. Haunted by the ghosts of a time long ago, the girls quickly find that they have been cast in a nightmare that will never end. Get ready for your close-up and it's "Lights... Camera... Die!!!"

Two ambitious realtors purchase a mansion once owned by a tragic silent film starlet, and discover too late that it comes with a deadly secret in this supernatural shocker from director Charles Band. Reese (Jessica Morris) and Danni (Ariana Madix) are looking for a house to restore and sell when they happen across a Hollywood chateau once owned by Rose Pettigrew (Jean Louise O'Sullivan), a silent-era icon who was dumped by the studios following the transition to sound, and embarked on a suicidal murder rampage that claimed the lives of comic Tubby Fitzgerald (Nihilist Gelo), horror legend Erik Burke (Robert Zachar), and cowboy legend Sonny Barnes (Eric Roberts). Decades later, that dark history still looms heavy in those cavernous hallways. At first Reese and Danni think they've stumbled into the deal of a lifetime. And they couldn't be more right, because this house is haunted, and odds are they'll never live to find anything better.